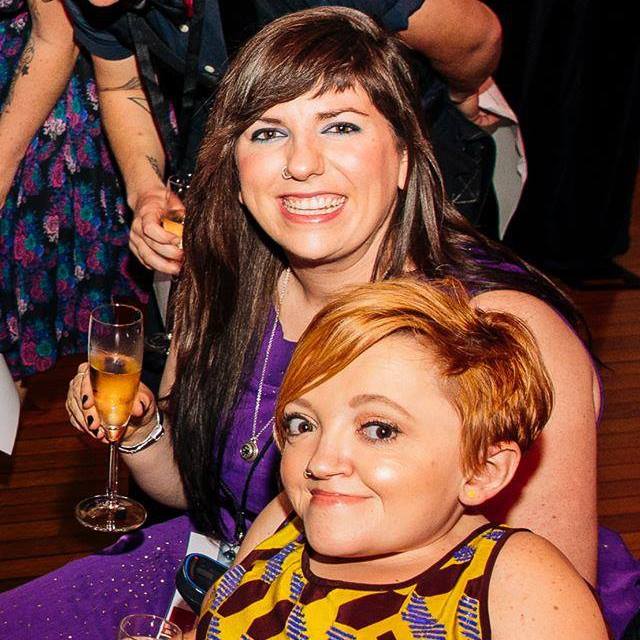 When I saw something this morning on facebook about Stella’s passing, my first reaction was to think it was some sort of joke she’d concocted, which tells you a lot about how far Stella was willing to go for a laugh. Surely, this was some set up for a searing critique of the way we talk about disabled people after they die. But no, it was soon confirmed that Stella Young was gone. And I am really fucking sad.

Stella and I wound our way into each other’s lives through work connections but we hit it off so damn quickly we soon became friends. I sought her out whenever my work took me to Melbourne and she often made sure to catch up with me when visiting Sydney. I am so glad we both had jobs that required such regular interstate travel. Coffees squeezed in between meetings, wines before flights, that time I crashed her birthday party and bought her a beer the size of her head, that wonderful dinner brocklesnitch mentioned in her beautiful tribute, where Stella had us all roaring with laughter (and drank enough wine to ensure she performed her Ted talk the next day just a little bit hungover). I am holding on to these everyday moments shared, grabbing at them and shoving them deeper into my heart and brain so I can hold on to them, so they don’t fade with time. A few weeks ago Jane and I had dumplings with her when she was in Sydney for work. That was the last time I saw her.

It can be daunting to fiercely pursue a new friend, especially one as clever and sharp-witted as Stella. I am not often intimidated but I have always been a bit in awe of her, and a little surprised she chose me as a friend, not because I don’t think I’m awesome but because she had such a wealth of choice. Her ideas and writing never failed to challenge and change even my progressive views (where progressive = raging feminist leftie queer). She was fierce and willful and knew how to dominate a room. But – and this is important – her politics and writing never set out to mock or belittle. People often confuse passionate debate with personal attacks, those making the arguments and those responding to them. But smart people know the difference. Stella knew how to wage a battle of ideas and, while appropriately impatient with society (seriously, what the fuck is up with Australia’s inaccessibility?), she was mostly patient with individuals so long as they were willing to learn. She could, of course, rock a bitchy take-down, but she seemed to mostly save that for private conversations.

I feel like she was always ten (or a hundred) steps ahead of most social commentators, and I am fairly sure that this will be one of the few times that ridiculous platitude – she was ahead of her time – will be apt. She was a big, creative, progressive thinker, and I feel a huge loss at the lessons we won’t learn from her massive brain, the jokes we won’t hear, the young comedians and advocates she won’t mentor, the hair colours she won’t work her way through, the lovers and friends she won’t grace with her time.

Many have written today about her accomplishments, with eloquence and links to her work. I implore you: go and read her work. Read everything she has written til you run out of words, then reread it til you’re sure you understand it all, then go and read it to someone you know.

People would have you think that every human being is of equal value, but I think that’s bullshit. Stella was worth more to this world than many and I am viciously angry that so many ignorant bastards are still alive and she is gone.

I am grieving for what we all won’t get to see and read and hear: I was really looking forward to seeing her perform her show at the Opera House next year, then seeing her tour internationally, to reading more articles and essays, a book, several books. I’m so fucking angry about all the massive achievements she had up her sleeve that she won’t get to experience and that we won’t get to witness.

It’s strange to lose a loved one who meant so much to so many people. But it’s also strange to lose a loved one who was a relatively new friend, and, while I know their grief cuts so much harder and deeper than mine, I am breathtakingly jealous of those who knew her longer than I did, who shared more than my couple of years or who lived close enough for spontaneous wines or Buffy marathons.

I will miss the late night text messages she’d send me, seeking advice, the ones I’d refer to as Stella’s Hilarious Forays Into Dating Women. I will miss our ranty catch-ups, loud with laughter and anger and silliness and gossip and passionate debate. I will miss her jokes and her bloody gorgeous face. I will miss reading her consistently outstanding writing; Stella could communicate more in a facebook status than most people manage in a lifetime.

But mostly I’ll miss the years I thought we had ahead of us. I want to know so much more about my friend. I wish I had more photos of us, but we were always so busy nattering I forgot to take a damn selfie. I wish I’d asked more random questions, visited Melbourne more often, stayed for an extra wine last time we had dinner (ok, I did that, so let’s say an extra extra wine). I wanted her to meet my children one day. I wanted to meet her next lover. I wanted us to tour to Edinburgh at the same time and I wanted to hear the lectures she’d give the Scots about all those basement venues and uneven cobblestones. I wanted to see her run for office. And win. I wanted to write together and perform together and sit around in our pyjamas eating ice cream and talking shit. I want all the regular things that happen in a regular friendship with an extraordinary person.

I thought I had more time.

An extended version of this blog post was published in SX Magazine and via the Gay News Network.