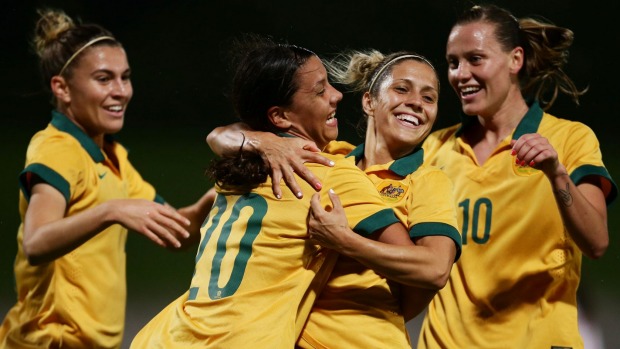 Belatedly posting this here considering the FIFA Women’s World Cup is over, but I wrote for Daily Life about my experiences with community women’s sport. I wanted to write personally about how valuable I had found joining a women’s soccer team, despite having no interest in being a sports spectator (or audience as I often clumsily call them). But I asked friends to weigh in via Facebook and I was inundated with amazing comments, so my article is largely the thoughts of others, collated by me. For the sake of word count, I couldn’t get everything in to the article (which you can read here) but I’ve added a few that missed the cut below. Also, an hilarious video by the Norwegian Women’s Football Team. Or Club. Or Guild. Or whatever you call sportsing clusters of humans.

“I decided to join after my second year of uni had taken a real toll on me and I was struggling with really bad anxiety and stress. It was probably the first thing I had ever done for myself that was entirely my decision. Sport had never been something I had autonomously decided was for me, so I never felt like it resonated in my youth. Playing soccer at 20 was very different to playing soccer at 13. I was growing, learning and enjoying what I was doing. I was reliving that feeling you have as a kid when you would go out and play in the park until you were exhausted but completely elated. I have realised that team sports and the feeling of being a part of something bigger than just myself motivates me in ways that dancing or going to the gym never have. Sport has absolutely changed my life in such a positive way, I only wish I discovered I enjoyed it when I was a shy teen.” – Elle

“I liked being a complete beginner at something again, and learning with other adults who were as bad at dancing as I am. And making new friends was a bonus. Netball was a bit more competitive and rough, and I was more conscious of my lack of ability. But as long as the team I played with didn’t care if we won or were brutally thrashed, I always enjoyed it.” – Yvette

“Joining the bats at 22 led to a big life change for me. I hated sports at school, and was never encouraged to do it. Being surrounded and supported by a fantastic group of diverse women was the first time I’d actually felt comfortable enough to just play, and to know I wasn’t going to be the best, and that it wasn’t a problem. I went from never exercising to someone that exercises 5-6 times a week, and it’s been hugely important for my mental and physical health.” – Julia

“Played all sorts of sports as a child, was crap at them all except maybe walking. Watched soccer forcibly as a child via the only TV in the house dominated by english premier League, my only concern was how high my cat was playfully launched in to the air by my brothers as a goal was scored. Joined sydney Women’s Baseball League in 2005 as I needed to widen my circle of friends as a new person to sydney. It took me 15 minutes to hit the training ball from the T stand in the first training session. Needless to say I spent some time on the bench\outfield. I thought “I’m never going to get laid” so plan B was to run the league for several years, which I did. Made 90% of my close friends in the 8 years I was involved in the League, it was a great avenue in to volunteering in other areas of the community and Still think fondly of the hours I spent alone in the outfield.” – Warner