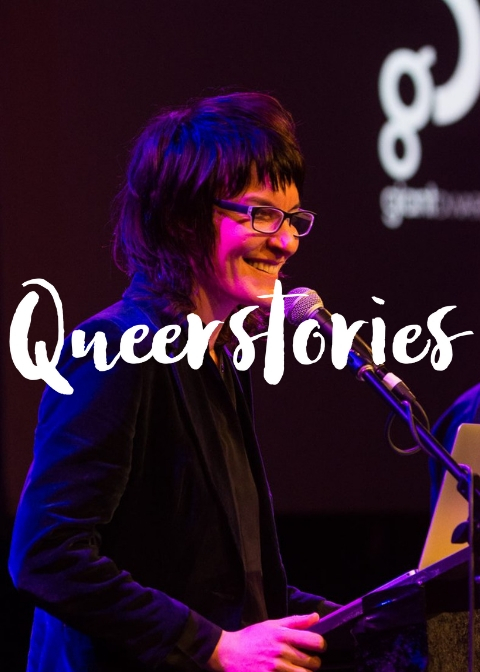 Hi I’m Maeve Marsden and you’re listening to Queerstories – the podcast for the monthly LGBTQIA storytelling night I run at Giant Dwarf in Redfern with support from the City of Sydney. This week musician Jen Cloher.

1986 was all about Whispering Jack, Lady Diana blow waves and Kylie’s debut on Neighbours. The end of each working day punctuated by Dexter running stats on a couple’s compatibility as Greg Evans leapt around the stage in Hush Puppies. Paul Hogan’s Crocodile Dundee took the world by storm, whilst the lesser-known masterpiece Malcolm caught the attention of more discerning moviegoers.

I was 12 and looked like a boy. So much so that I would usher ‘looks’ when I walked into the ladies toilets at the Hoyts cinema. I owned a silver BMX with blue tyres that my parents had embarrassingly assembled for my recent birthday.When not at school I wore black ripple soles, Levi’s, a Black Bond’s Tee shirt and a Ford jacket. Holden jackets were not cool.

In 1986 I lived my life outside of Catholic Girls School largely as a boy. I also had a dirty secret. I was addicted to Galaga, the Bally video game sequel *a few people in the crowd cheer* thank you can we have a moment for how great that game is, I’m so glad I’m not alone. This story is going to touch a special place for some of you. The Bally video game sequel to 1979’s Galaxian. The game play of Galaga puts you in control of a spacecraft which is situated at the bottom of the screen, with enemy aliens arriving in formation at the beginning of a stage either trying to destroy, collide or capture your spaceship. The player progresses every time alien forces are vanquished. Galaga is one of the most successful titles from the golden age of arcade games – Pac Man, Ms Pac Man and Donkey Kong it’s highest ranking. I was no fool I knew a good game when I played one.

The closest Galaga tabletop was about two kilometres from my house in a corner store next to St. Peters Anglican Boys College. This is where the sons of wealthy Adelaide radio personalities were schooled and whole tribes of South Australian farming offspring were sent to board. The classic St. Peters casual attire consisted of a pair of RM boots, beige work jeans, blue and white striped shirt, collar up and a Driza-bone.

I was schooled at the Catholic Ladies equivalent Loreto College, any Loretrians in here tonight? This story is going to touch a special place for you. Iron-fistedly ruled by a coven of Irish nuns, daily we were tortured with thwacks to the back of our legs.  Adelaide is famous for its churches and murders and one can quickly see how they came to live side by side.

The life of a border at a religious school seemed like a sad one to me. Each Friday as other kids looked forward to weekends at the surf or speed skating at Down Town, borders had to go back to the same four walls. The corner store was a nearby outlet for boredom and I’m pretty sure the St Peters borders kept their business afloat. My dedication to Galaga was so great, that I was prepared to sit and play on a Saturday afternoon surrounded by a pack of St Peter’s lads. My expertise soon grabbed the attention of a few regular gamesters and before long I was drawing a crowd as I furiously jerked the joystick back and forth, annihilating one row of alien bees after another.

One day, a large thuggish red head with a litany of freckles called Davo asked me what my name was.  “John”, I replied holding my breath to see if he bought my disguise. Davo looked me at for a few seconds and then, “John does alright for a little fella.” And so I became John, the little guy on the silver BMX with blue tyres, purple reflector sunglasses and a Ford jacket. Months passed and my status as an expert grew. Now when I walked into the store I was greeted with nods of recognition. As I sat down with my Farmers Union Iced Coffee and a neat stack of twenty-cent coins; a crowd would form to see if I could top my previous high score.

Life as John was comfortable. At Loreto I was daily confused by the endless rules and protocol of being a young lady. Young Ladies cross their legs, don’t shout, pull their socks up, wear stockings in winter, wear a blazer when traveling outside of the school grounds, never open their mouths when masticating food, never talk unless they are spoken to, wouldn’t be seen dead on a BMX. The rules were endless and dull. They meant nothing to me. I lived for the weekends when I could transform once again into that confident, sexy little man in black – John Cloher.

Keeping up a habit is expensive. To fuel my weekend binge I needed at least ten dollars. This was stolen from my mother’s coat pockets, my father’s bedside drawer and a collection of books in the study where my parents stashed their bigger notes. It started with some small change, a handful of fifty cent coins and the occasional two dollar note, but soon I was snatching purples and blues from the pages of Pride and Prejudice and Gardening Australia.

Thankfully my parents were busy people and my long absences went largely unnoticed. I would rise early on a Saturday morning and peddle down to the only 24-hour McDonald’s in Adelaide. As I scoffed down my cheeseburger, I could feel the butterflies in my stomach begin to wake up. Soon I’d be at the corner store, playing Galaga. There was nothing in my life so performative, adrenalin filled and thrilling. Nowhere that I felt so adequate and successful. It was in this tiny corner, surrounded by St Peter’s boys that I was liberated. Where I could truly be me. Where I could live freely as John.

All deception runs its course and my halcyon days were numbered. One learns in life that everything passes both the good and the bad. My schoolwork was suffering and I was deeply unhappy at Loreto. I had friends at school but most of them were fast becoming girls. Ra Ra skirts and Bubble dresses were the latest fashion craze as Madonna and Cyndi Lauper topped the charts. I was also starting to discover that no matter how hard I tried I couldn’t get a boner for Christian Corveaux. Sorry Christian if you’re out there listening to the Queer Stories Podcast because somehow, you ended up being a Gaylord too. You were no doubt adorable – but no matter how many times we spoke on the phone after school, I just didn’t feel that special thing.

I was neither a girl nor a boy. I was just me. Wherever I looked I couldn’t find a place to belong. I didn’t even know what a lesbian was. The word ‘queer’ was used to describe dirty old men who hid in parks waiting for children to walk past. A positive non-binary experience growing up wasn’t a reality. Adelaide in the 1980’s was not a place where you discovered gender as a journey rather than a destination. It was a place you survived.

The character I identified with most was E.T. Here’s a photo to prove it. I was into outsider role models. And just like E.T, I was somehow trying to phone home. Planet Earth made no sense to me. There must be somewhere out there where little people like me could just be… left alone.

End of term was fast approaching and I had an essay due Monday. My mother Dorothy, a tall, proud and brilliant academic had confined me to my room to study in preparation. As I sat pouring over my history books I could feel the first thought drop in, a warm explosion in my stomach. I longed for the feeling that came with completing level 10 just before the first Challenging stage, with a double fighter ready to obliterate a swarm of alien wasps. That sense of achievement as ‘10,000 points PERFECT score’ flashed across the screen with a triumphant bleat from Galaga’s catchy theme song.

I could take it no more. I threw down my pen and stealth like, moved quickly to the study to grab some cash. My mother was in there working. No mind. Next to my Dad’s dresser drawer. Empty! Of course! Just a few days prior, Lucy Turnbull had stopped past collecting for her MS Read-a-Thon. In a rare and desperate move I went direct to my Mother’s purse. It was slim pickings. A fifty and a twenty dollar note. Whatever I took would be noticed. I no longer cared. I placed the twenty deep in my back pocket and mounted my sliver steed.

Like most Saturday afternoons the shop was pumping. The smell of Balfour’s pies and pasties heating in the warmer, a fresh batch of Allen’s strawberry’s and cream on the counter, and as I sat down, the faint smell of cigarette smoke on some of the older boys. I had now earned such a reputation that I was given the table as soon as the game was over. Taking my seat, I felt the adrenalin catch up with me. There’d be some explaining to do when I got home but for now, I was safe. I took a big bite of my Crunchie and settled in for the long game.

Things were off to a good start. Having passed the first two challenging stages with a perfect score I was two men up and armed with a double fighter. I sailed through Level 30 where most players become unstuck as the speed of the game increases. Another challenging stage and a perfect score. I had now clocked 250,000 points and had a serious edge of about 20 people around the table trying to catch a glimpse of what was coming next. Even Mick the shop owner was watching. After Level 40 he gave me a free bottle of coke. I took a massive gulp before firing into the next round.

I was now at the 8th bonus stage and about to clock half a million points. My highest score ever. Each time I completed a stage a cheer would resound, my pals slapping me on the back with approval. I was in new territory, levels none of us had ever seen before. It was thrilling. As the next stage began Davo leaned close to my ear and said, ‘Go John, you got this mate.’

It was then that I started to notice a commotion near the door, where out of my periphery, I could see a tall shadow had appeared. I looked up to see, to my mother standing there. I looked down, hoping somehow that the crowd would conceal me. But it was too late. ‘Jennifer, come home at once!’ Silence. Followed by the loud explosion of my fighter blowing up. And then the moment as it slowly dawned on the boys who Jennifer was. I sat there like a lump. “At once!” my mother barked.

I stood up and started to walk toward the door. A couple of the boys sniggered but the general mood was one of shock. John was a girl?!! My face crumpled as I slowly climbed into our baby poo coloured Volvo, overcome by feelings of shame and defeat. My cover blown, I never went back to the store again.