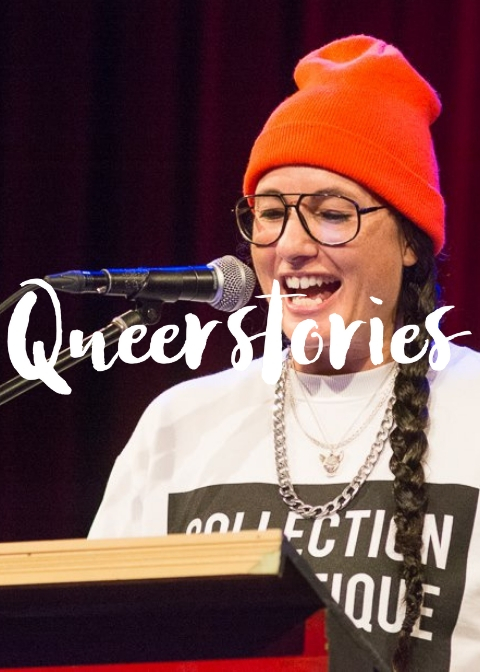 Hi I’m Maeve Marsden and you’re listening to Queerstories – the podcast for the monthly LGBTQIA storytelling night I host at Giant Dwarf in Redfern with support from the City of Sydney. This week, comedian and storyteller Annaliese Constable.

Ok, so a little while ago, my partner Emily and I, were at a fancy restaurant 6 months late to celebrate some kind of anniversary. It was either the anniversary of a time we agreed (rare, right honey?) or it was the anniversary of our first prank which was when I texted Emily from an unknown number and just wrote, “you’re going to be stabbed”.

So I’m sitting confidently at our anniversary dinner when Emily leans across the candlelit table, takes my hand and says,“You’re probably going to take this the wrong way but if you were played by a man in a movie you would definitely be a pedophile.”And I was like, ‘Ummm why?’ And Em impatiently says, “Because you look like a pedophile.”

As though I should already know that. As though this is intrinsically known by everyone. As though if you showed a photo of me to the butchers 4 year old the child would immediately salivate in anticipation of forthcoming lollies

Emily went on to say, “Or maybe it’s your mannerisms…. You’re very odd.”

Just a question…How is the right way to think about whether or not you resemble a pedophile? There’s no right way.

Em has a real knack for inflicting unexpected injuries, so much so that, not unlike an abuse victim, I’ve started to keep a diary of Emily inflicted traumas.

Because most people might turn in their sleep. What Emily does can only be described as breaching. Em’s carcass will suddenly surge from the sheets – her hair flying back off her face as her body bucks one metre above the bed. She curves her torso downward and with the force of gravity one sharp shoulder will slam into my chest chiselling away a shard of my sternum.

One fateful night I asked Emily to put moisturiser on my sunburn. Emily picks up the tube of moisturiser and fucking somehow, somehow manages to drag the jagged tube edge along my burnt flesh slicing a long thin red line of blood. The cunt cut me. She fucking cut me. She cut me on a burn. She cut me on a sunburn and I didn’t kill her and that is why your honour, that is why, I have nominated myself for the Nobel Peace Prize, at a minimum Australian of the Year.

One night I was having a horrible nightmare as Emily slept peacefully beside me. In the nightmare I was driving my car and I could feel, I just knew, that there was a bad man in the back seat. You know the bad man? Everybody knows the bad man. He’s faceless and visits you while you sleep.

So the fucking bad man is in my fucking car right now. I can’t see him but I know he’s there. I was driving and checking my rear view mirror and couldn’t see him and then checking the mirror again and he’s not there.

I curled my fingers into hooks and holding them tight I reached out to rip the arseholes face off. In my dream I dug my fingers in to his skin and tore his face off and threw it out the window leaving his raw bleeding skull motionless and weeping in the backseat. In reality, in reality I reached across the bed, hooked my fingers into Emily’s flesh and tried to rip her face off.

So I guess we’re even.

Emily’s really got a way with words. Aside from telling me I resemble a pedophile, a few other things Emily has said to me stick out. The first was when we were at a party and Emily publically scolded me and told me to stop ruining things with my  personality.

One time we were in polite company (including my Nanna) and Emily referred to my arsehole as the Jenolin caves. Why? Why were we talking about my asshole? Why?

Another day we were heading out. Emily gets a bit socially anxious, especially when she comes out into the world with me because, I’d say I’m an impassioned customer with a strong sense of social justice. Emily would describe me as being really fucking rude, or like a bulldyke at a gate. So we’re heading out and Emily pleads with me, “Anna when we go to the shops today can you promise not to cause a scene?”

And I was like, “Hmmm, don’t try to control me, let’s just say I wont cause a scene this morning. I could never commit to the whole day.”

And Emily responded by saying, ‘Annaliese, being with you is like babysitting a dickhead.’

Surprisingly Emily and I have the occasional argument. Nothing that requires the police but you know arguments that could only be improved with an audience.When we were in New York we mistakenly bought enough hash brownies to last ten people three months with at least one of those months being in another dimension and you know what that means hahaha lol 420 blaze it motherfuckers.  We had three nights left in New York and were fully committed to not wasting our green investment.

The problem with hash brownies is that as soon as you get stoned you want to eat and usually the closest thing to eat are the hash brownies. So you’re happy snacking on the hash and you forget very easily how much you’ve consumed.

I actually reckon hash brownies and counselling should be the go to treatment for any anorexic person. Don’t judge me it worked for me.

So! We were fucked off our faces in a bed in our hotel room watching comedies. First Emily took the brownies away from me and told me I wasn’t allowed any more. First they came for the hash brownies and I did not speak out.

Have we learned nothing from history?

I moved on to the Cheetos. I was lying on my back scoffing cheetos and giggling at the TV happily when Emily came for the Cheetos. She took them away. She told me I wasn’t allowed any more. She said she took the Cheetos away because I was going to choke.

I felt a sense of injustice that can only be understood by a woman who has had her child removed. I held back tears as I ferociously began debating how fucking ridiculous this choking theory was as there had been no sign of me even possibly choking ever in my entire life!

I still maintain that I never would have started choking if I hadn’t suffered the injustice of such an accusation. It was a self fulfilling prophecy. I had no choice but to choke.

Emily tried to fucking kill me. She tried to kill me with irony which is actually the gayest way to commit murder.

Ok, I do have a soft spot for Emily. When it was born, when I was born it was my fontanelle but as an adult my soft spot for Emily is my labia. Who else, but Emily, would come along on my MacDonald’s Monopoly obsession to the point of witnessing me going through a Maccas parking lot bin, getting in a fight with an ibis, and then losing the fight to the ibis.

Emily knows that I love her. She knows that every time I put a tampon in I think about her. I know that she’ll breach tonight but I’m still going to go to bed with her. I know that I could rip her face off while she’s sleeping but I don’t. And that, that is love.