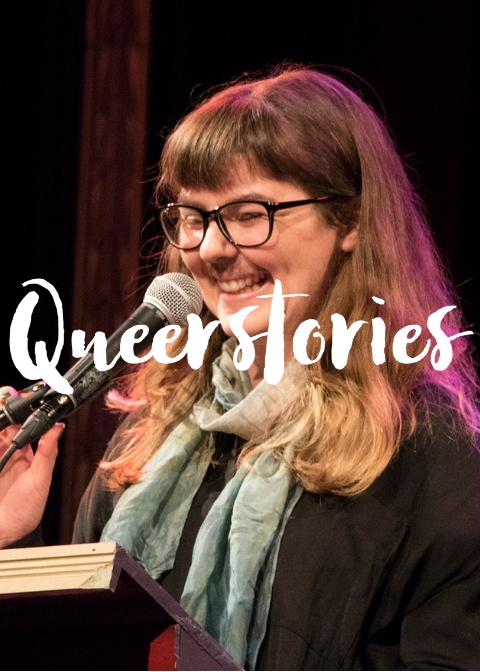 Hi I’m Maeve Marsden and you’re listening to Queerstories – the podcast for the monthly LGBTQIA Storytelling night I run at the Giant Dwarf in Redfern with support from the City of Sydney.  This week zine maker and musician Bastian Fox Phelan.

Hello everybody. I am going to read a story tonight called Black Pearls.

I stood before the bathroom mirror, every new hair on my chin was shining. I caught myself tugging at the roots with my fingers. How they longed for a pair of tweezers to be back in the pink bathroom of my family home, mechanically plucking until the skin turned chicken raw. But I promised myself when I moved alone to this town that didn’t know me, I would let myself change.

I called a truce with my body. Laid down my weapons. Liberated, the hair sprung up all over my face. People had begun to stare. In shopping centres small children stage whispered to their mothers ‘is that a boy or a girl?’ I couldn’t answer. I thought to myself I should write a zine about this. I knew it made no sense. My beard was ugly beautiful. I wanted it and I had no choice. My extraordinary form enlarged in the mirror.

I was behind the curtain in an examination room naked from the waist down sitting on a paper sheet. The doctor spread the swab on a glass slide, sealed it in a tube and washed her hands. “You’re very hairy,” she said. I looked at my legs. That was just the hair I hadn’t removed yet. There was more that grew all over my body, hair that I had disappeared. “How regular are your periods?” she was at her computer now ratatat on the keyboard. “They’ve never been great” I said, pulling back the curtain. “I am going to send you for an ultrasound, see what your ovaries are doing” I touched my belly, in the place where I imagined they were… doing or not doing something. The Dr handed me a letter addressed to the womens imagery suite.

If I’d known my hair would be an issue I would’ve done things the other way around. I was booked in for a leg wax after the pap smear. At the salon I lay on another paper sheet on a plastic bed. The beautician put on a soundtrack of whale sounds while the smell of warming wax filled the room. With a spatula she smothered my shins in the sticky substance, she pulled, her fingers grasped the edge of the wax and ripped. I closed my eyes and thought of the beach, of short skirts and changing rooms. The beautician stopped at one point and told me that it required a great deal of physical strength to do professional waxing, especially when people have a lot of hair. I noted her arms, so toned and supple, and felt myself lying there soft bodied like a jellyfish.

“It must hurt,” she said. “I’m used to it,” I said “It’s not an issue” The waiting room of the imaging suite was lined with vinyl chairs. A row occupied by women in various stages of gestation. When my name was called a sonographer ushered me into a room – another paper sheet, another curtain. The sonographer produced what looked like a long thin dildo. She covered the probe in a plastic sheet, applied transmission gel, and pushed it inside me. Sound waves rebounded off my organs. “Your ovaries are covered in them” the sonographer swung the monitor around. I gazed at the grainy black and white image a moonscape with black craters. My little miracle. “Those dark spots are ovarian cysts” she said, “that’s what happens when you ovulate but the egg doesn’t mature, if the follicle cant release the egg it doesn’t get reabsorbed then it sticks on the ovary and turns into a fluid filled sack”. The word egg triggered a surge of nausea, my body the egg factory. There was a problem on the production line, all the eggs were backed up but the line kept moving. They were piling up. Rotten the whole system. “Don’t worry,” she said “when you want to get pregnant they will give you a drug to make you hyper ovulate”.

This was my destiny. To be the mass production egg factory of the future. Back in the waiting room the receptionist gave me the scans in an envelope addressed to my doctor. Together we looked at the pictures – a pair of twins in the shadows, their oval shaped faces dimly lit, each one draped in a string of black pearls. They hoarded their treasures, their chambers were cluttered with these useless things. “Poly Cystic Ovarian Syndrome” my doctor said. She pointed at the row of cysts on the ultrasound of my ovaries, she reminded me of my body hair, my irregular cycles. She referred to my hormone levels pushing at the levels of normalcy. She mentioned my moustache. I had a set of symptoms, strung together they adorned me with this condition. It wasn’t rare, 10-15% of women have it she told me. I wondered why I had never heard of it. Long term, PCOS is associated with diabetes, heart disease, high blood pressure, infertility, depression and anxiety. I felt the familiar pang in my stomach – I knew anxiety. Is there medication? “We could give you something for the hair but it has a lot of side effects” “The hair doesn’t bother me much,” I said. “How do I manage the other stuff?” “Don’t get fat” the doctor said. She gave me back the ultrasounds, the twins in the shadows smiled.

A black pearl is born from a flaw of nature. In the borders of the ocean, a grain of sand enters the parted lips of a mollusk and embeds itself in the flesh. The black lipped oyster is protected by a strong mother, the inner shell layer. She finds the intruder, the grain the irritating seed and smothers it within the folds of her gown. Entombed within the shell, the oyster shell remains open. Its’ gills filtering food and phosphates. Sorting food from detritus. With each layer the seed grows in side and in value. The oysters survival is the oysters art. When the oyster is opened the gem is offered up. The back pearl – born from a black lip.

Maybe I wasn’t meant to be a girl. Walking beside the highway, cars streaked past in bursts of sound. “I should become a boy, because I suck at being a girl” I said.  My boyfriend tightened his grip on my hand “don’t you dare say that”. In bed he slept while I lay awake, running a finger over the hair on my upper lip, feeling the stubble on my neck and chin. He liked the moustache, thought it was sexy. But what about the beard I had been hiding? How would he feel about that? Some women had moustaches, but I didn’t know any with beards. If I grew out my chin hairs, would I still be his girlfriend? Would I still be a girl?

I snuck out to his computer and launched the browser. Images slid by – rose coloured razors, a pastel pink measuring tape, coral strips of birth control pills, this website presented my pathway to feminine health. I clicked on a link about hair and got stuck on the first word “excess”. I was always too much. I couldn’t be contained. Four years old, a tea cup sized storm I had thrown myself against the bedroom door while my mother sat on the other side. Then I climbed onto the roof of our terrace house on Enmore rd and reached for the setting sun before I was yanked back through the window.

I scrolled down the page, noticing all the words that snagged on the way, “unwanted, un feminine, wrong”. One article listed all the ways you could deal with hair – wax, pluck, shave, electrocute, dissolve with chemicals, pulse with lazers. I had tried everything but nothing could stop the cells dividing, building new hairs to replace the ones I defeated. The computer went to sleep as I sat thinking.

I had a moustache since I started highschool. I lived through highschool with a moustache. I thought about the tough looking woman on the cover of the library book I had been reading. How my boyfriend had called her unattractive. Female masculinity described what happened to girls like me. How we were told to shave and behave. But the book also opened a window onto what we could be – androgynous, transgressive, powerful. My abundant hair wasn’t a symptom it was a sign.

A hair is born from a root buried deep in the follicle under the skin. In the dermis the living tissue of the true skin, nerve endings coil around blood vessels while sweat glands snake up to the epidermis. Hair is built from a tough protein called keratin. The hair itself is layered, the cuticle or covering, the cortex which provides strength or pigment, and the innermost layer – the soft, fragile marrow called the medulla. The hair root is nourished by blood, the ground water of the dermis and hormones, the chemical messengers that fertilise growth. As the hair awakens in the growing phase it pushes up through the skin breaking the surface. Then the follicle shrinks and the hair detaches from the root. While old hairs are resting new hairs begin to form. In the final stages the hair is gradually loosened, and cast off.

I was making a new zine – I typed it up on my red valentine type writer. Each letter embedding pigment in the soft cream paper. Over the years I had progressed from making fan zines about cats, to zines that were more personal but this one felt different. The words had formed within me, the memories scratched ingrained. The boy in primary school who had pointed out my monobrow right before school photos. The high school kid who had seen my beard hairs and exposed me yelling across the playground. All the names I had been called – hairy, ugly. I arranged the pages in order. In between I glued images of bearded ladies cut from a book about the circus. It hurt to look at them. Was that me now? A spectacle, a curiosity. Or would I become something else. I stroked my beard – the hairs now long and thick, my zine was almost ready to photocopy it just needed a name. I called it Lady Beard. The words encased the old irritancies in a lustrous cloak. Trasmuted, diagnosis had become distinction. I opened my hands and offered the pearl.