Eloise Brook: Between the Coloured Girls and the Sax Solo 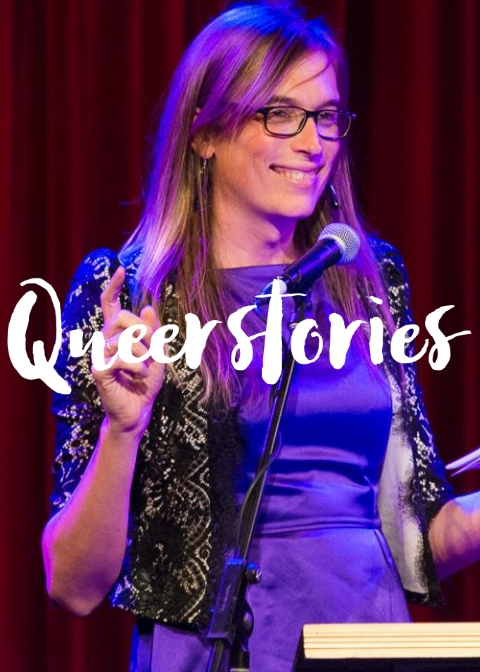 Hi I’m Maeve Marsden and you’re listening to Queerstories – the podcast for the monthly LGBTQIA storytelling night I run at Giant Dwarf in Redfern, with support from the City of Sydney. This week – Academic Eloise Brook.

Before the internet, there was the music. Before there were words to describe being trans, there were songs to help you find them. My childhood was the late 70’s, late 80’s. Sydney Brisbane, but come Summer it was the Gold Coast. It was knit bikinis, lurid paisley wallpaper, styrofoam boogie boards. Where going out meant paying money to get shat on by a swarm of hysterical, juiced up rainbow lorikeets.

It was a desert, and as a poor young trans girl I was dying of thirst. Two things saved me – the first of two, there was this fantastic Japanese Anime cartoon on Saturday mornings called ‘Princess Knight’ about a daring, heroic crown prince whose secret was that she was actually a girl. The villains were always trying to unmask her, coming up with fucked up shit like squirting liquid at her that on contact would turn blue if she was a boy, or purple if she was a girl. Because, if anyone officially found out she was a girl it was going to spell disaster for the kingdom. Looking at my family I understood this instinctively.

But there was the music. Mostly in cars, mostly on the radio, but everywhere. Like lots of amazing music. But every now and then there was a song that cut through, it got into my young trans girl head and made its way to my heart. It spoke to me of something deeper. Something I needed a car trip or a bike ride or blue sky and a patch of lawn to make sense of. A problem I had to solve. A hint that there were other ways to put the world together. Vital ways, that were important for me to understand.

Of course, there were those songs too. Like Lola or Led Zeppelin’s Royal Orleans. Songs about a man who gets drunk and hooks up with a trans girl, or nearly hooks up with her. The Beatles are worth mentioning – Get Back sucks for me, the lyrics:

Oh and while we’re at it lets talk about your song Jet:

Don’t try to tell me this is a song about some pony, or a fucking Labrador puppy that you had to give away. I’ve had hours to listen to this song, and I’m going to call it. Jet is about that time you had sex with David Bowie. *Crowd laugh* And a song about having sex with David Bowie, as we know, is worth more than all the Wings back catalogue combined.

Then there’s Obla Di Obla Da – the story goes the band finished a perfect take, when Paul said “Sorry lads” (I’m not going to do a Liverpool accent, it’ll be Irish) “Sorry lads we’re going to have to do it again”. Nobody knew what he was talking about, but when they listened back again they got to the end and they heard these lyrics:

Happy ever after in the marketplace

Desmond stays at home and does his pretty face

And in the evening she’s a singer with the band

They listened to it, and they kept it. One glorious mistake. The Beatles did that and a girl like me heard it. Zeroed in on it like it was a blazing light in the darkness. The Beatles, indadvertedly and casually had left a space in the ether for anyone listening to hear that Desmond was pretty, that she went out in the evening and she sang. And what she sang about only me and my sister would ever know. Or care to know. Coz we were the only ones listening like our lives depended on it.

David Bowie, and I love David Bowie, was a disappointment to my trans girls heart. I spent years trying to work out David Bowie and how his songs fit into my constellation of music. All the Young Dudes, Oh you Pretty Thing, Lady Stardust, Boys keep Swinging – these songs are about sexual rather than gender transgression. He sings about a trans sex worker in Queen Bitch but he does so in a rage of having to compete with her for a boy. There’s an exception, one of his songs, and I’ll come back to it.

There was Boy George, there was Marilyn, who like David Bowie bent gender majestically, but sadly left me nothing to add to my list of songs.

In 1987 AeroSmith released Dude just like a Lady. Mostly, it made no sense. There’s a woman in a bar, she has her picture hanging in the bar as well. The singer is clearly turned on by her, things are going alright, but someone asks an inappropriate questions of her, what exactly is not clear, but it’s enough for her to pull a gun and start shooting at the singer. But you know it wasn’t a deal breaker for him, because later they’re having sex. In the bar? Not sure. But I’ve listened to enough 80’s glam rock to say, yeah probably. He gets a bit creepy and fixated on whats between her legs at one point. He seems to ask her anal at another. That’s ambiguous. But then, even though he has been having sex with her for some time, he seems relieved that she has a woman body after all and so they end up having sex together all night long. Still in the bar. Probably.

But then, it’s the next morning and it seems the singer is bragging to someone – his friends, the bar tender, someone in the queue for the toilet, don’t know. That the woman he’d just had sex with all night in a bar is actually a “dude”. A dude who, in fact, is just like a lady. Now this song is many things, but really it’s not actually that confusing. What is confusing, what was confusing for me, was that Dude just like a Lady is sung by Steve Tyler of Aerosmith. Who, circa 1987 is without a doubt, a dude who looks like a lady.

Now picture this, I’m driving in a car, I’m 11 or maybe 12, and then this song comes on. The song that is the whole point of this story. A song that was a life boat, hidden in a popular song pushed out into a dangerous sea for a girl like me. I remember where I was when I first really heard this song. I remember, because every time I now hear this song, like every time after my 11 or 12 year old self heard it, I am there.

I am being driving on a Gold Coast road, Coollongatta, Tweed Heads. There is a rickety old bridge, that now no longer exists. I hear this song, and I am understanding for the first time. I am understanding the song the way that links all the other songs I’ve collected in my mind. The good songs, Obla Di Obla Da, or Bowies Rebel Rebel, Van Morrison’s Madam George which probably wasn’t about a trans girl but I was 11 or 12 at the time and it was slim pickings. Those songs had attacked my trans girl heart and given me hope for the possibility of being, of living. An invitation to escape, to travel, to get away from a place that had too many beaches, too much sand, too many fucking lorikeets. A place that just didn’t understand.

Holly came from Miami FLA, hitchhiked her way across the USA

At 11, 12, I still had no words. I still didn’t know how to describe what I was even to myself. Though, of course I knew, as we all know in our queer hearts what we are. Even if we are terrified of where it might be leading us.

Shaved her legs along the way, plucked her eyebrows and then he was a she

To my younger self, it was a magic transformation. Each time I heard it, I saw it. He became a she. It was as simple as that in my mind. A possibility. And then it was like She spoke to me through Lou. She said hey babe, take a walk on the wild side. A coloured girl sang and everything between them and the sax solo was mine. To walk any way that I wanted to, and so I did.