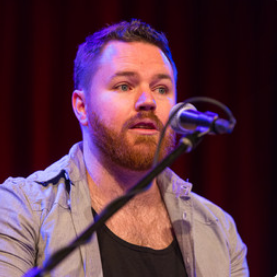 Hi. I’m Maeve Marsden and you’re listening to Queerstories – the podcast for the monthly LGBTQIA storytelling night I run at Giant Dwarf in Redfern, with support from the City of Sydney. This week – writer Simon Copland.

“I have two boyfriends actually,” I said to the man who was flirting rather aggressively with me on Grindr.

“Oh,” he replies. “I couldn’t do that. I would never be willing to share you.”

I think he meant it to be sweet as if having a random wanting to possess me would make me want to flock into his arms. It wasn’t sweet.

When this chat ended, rather abruptly, in this case, these comments are so common from gay men, it’s not funny. When it comes to my relationships, many like to judge. Seeing me and my partners as suddenly being “too queer” to fit in anymore.

I first met James over 11 years ago. And, yes, for those of you who looking at my youthful features, that means I met him just after I turned 18. For those who weren’t thinking that, fuck you, I’m beautiful.

This night, a Monday during my first ever O Week, was rather, let’s say, extra. Highlights included, first, being asked to stop making out, not because anyone had a problem with it, but because we were blocking entrance to the bar, James trying to impress me by sliding down the bannister of the stairs; it was not impressive at all. And then, James hitting on another previous fling just before he left. But, the pièce de résistance was the text that James sent me as he was walking home, which simply read, “Why aren’t you following me?”

Despite this dodgy start, we quickly fell for each other, and from the very beginning, James wanted our relationship to be open, that we could have sex with other people. At first, I found this challenging. I admit, having just turned 18, and, as highlighted by James and my first encounter, obviously being willing to fuck anything that moved, I liked the possibilities. It was a new world. I was, however, also anxious whenever it happened the other way around. I got panicky every time I saw James flirt with another man. But, at this time, I had little to lose and so I gave it a shot. Soon, I became more comfortable with the idea that either of us having sex with someone else did not have to be a big deal. In fact, it could be a healthy thing.

Things intensified when we moved to Brisbane about five years ago. Hanging out with some more radical queers, James and I started to feel more comfortable with the idea of polyamory. I’m sure Joh Bjelke-Petersen is looking down on us today, proud of what his state has achieved. Then, we went on a holiday to Edinburgh and met Martyn.

James and Martyn had actually been friends for years and met on Tumblr. And, no, before you think it, not the way that most people use Tumblr these days. There were both into roller derby, joining a growing community of lesbians, feminists and social misfits who weren’t given entry into any other sport.

We were in the UK for the Derby World Cup, which James was playing at, and we decided to catch up for a drink. Martyn and I hit it off, and about a week after we first met, hooked up after a night out. On a side note, on this night I also encouraged Martyn to give his phone number to a cute barman. You may think that’s weird, but in the poly world, that’s totally romantic.

When we got back to Australia, Martyn and I chatted online every day, James teasing me constantly. He called Martyn my “Scottish boyfriend,” and would make childish noises like “Oooh,” every time we chatted. A month later, on ANZAC Day to be exact, Martyn and I started properly dating. To think about it, actually, I bet Joh Bjelke is really proud of his polyamorous state where ANZAC Day now symbolises the freedom to start dating a second boyfriend without fear of repression. God bless Australia.

That was a few years ago. Now, the three of us live together in Canberra in what has become a sense of normality. Our house is just like any other, really. We do the shopping, we divvy up the housework, and we have the occasional fight. Our Christmas trip to the coast this year was marred by a bug that swept through the three of us, with the sound of violent vomiting replacing the peaceful tones of the ocean waves.

..at the top of our lungs, covering up the fact that none of us will ever be as sickening as Sasha Velour, Katya, or Trixie Mattel. But, amongst all of this normality, there are still, at least according to our society, some radical ideas. Ideas that love did not have to be limited just to one person. Ideas that we should be able to enjoy sex and not feel guilty about it. That, in fact, that sex can be healthy, and good fucking fun. And, most of all, a radical idea that if we can be open and honest about our desires and needs in a relationship, that can be a good thing.

This is where I come back to those gays on Grindr because while straight friends have been largely blasé about my relationships, I’ve had multiple gays tell me that through my so-called promiscuous ways, as if that’s a problem, I’m giving us all a bad name. One even told me, and this is true, that polyamory hurts children, spoken with the same confidence and complete lack of evidence as those Conservatives who say the same thing about gay parents.

Writing for SBS Sexuality, the columnist Carrington Brigham – you can just tell he lives in Vaucluse based on his name alone – summarised the argument I often hear. He said, “Most Australians view throuples as an experiment unlikely to pass the tests of time. They see it for what it is: Sexual gratification and hedonism.”

Carrrington, if you happen to be here tonight, I think you’re at the wrong event. This is Queerstories. Homonormative Bullshit Stories is just being held down the road.

I know these responses are a reaction of decades of queers being told that our sex is disgusting. The reaction to be told that the only way we’ll be accepted is to stop talking about and having sex, and to join in the bonds of holy matrimony. Given that, I can’t hate the people who respond this way, even though sometimes I wish I could. But, at the same time, we cannot stand for it either. Because if we really believe that Love is Love, that has to include all love. It cannot just extend to the love that happens between two White monogamous gays, all occurring with the hope that the next time they have sex, it’ll be legitimised by the State, and that the wedding rings will have to be taken off before the fingering begins.

But, even if my relationships have nothing to do with love, and it’s just about sexual gratification and hedonism – and trust me, if you’ve seen James, Martyn and I trying to organize our shopping for the week, you’d know that’s not true –  then, what is wrong with that? I figure that if you’re criticising something as being just about sexual gratification, you’ve probably never had a really good fuck. There is a lot worth doing for a good fuck.