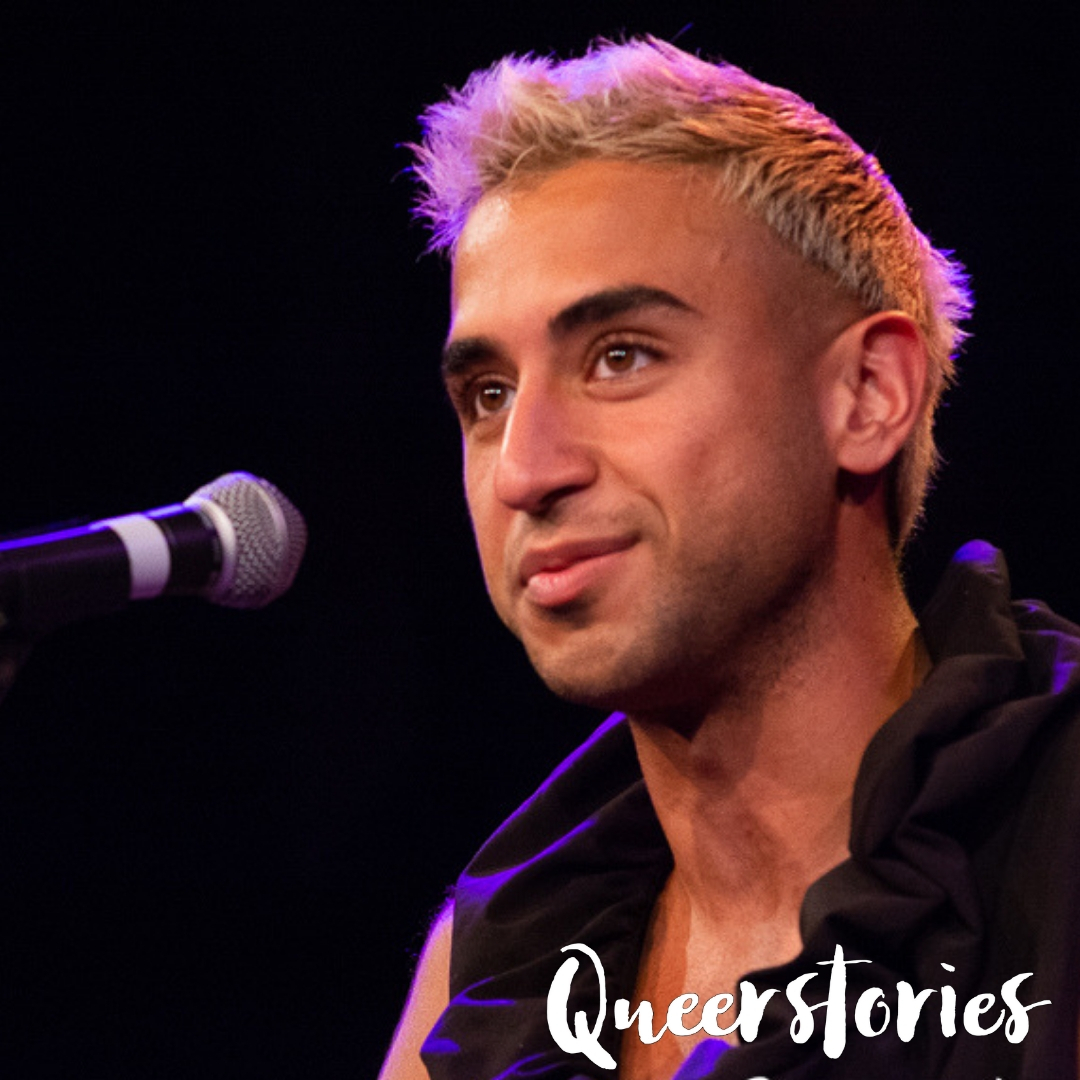 Bobuq Sayed is a writer, multi-disciplinary artist, queer youth worker, and community organiser of the Afghan diaspora. They have co-edited Archer Magazine in the past, and they are the co-editor of un Magazine’s forthcoming issues 13.1 and 13.2. Their work has appeared in Kill Your Darlings, Black Girl Dangerous, Overland, The Lifted Brow, Peril, and VICE, and they’ve performed at Melbourne’s Writers Festival and the Emerging Writers Festival. They performed this story in Sydney and Melbourne.

About a month before I finished my last semester of uni, I decided impulsively to buy tickets to Hawaii. Inspired by Julia Roberts’ breathtaking performance in Eat, Pray, Love, I wanted to nurture the White woman within and give myself some tender love and care. At the time, I was living in a decrepit share house in Parkville with a French guy I’d almost convinced myself I wasn’t in love with, and a gorgeous Filipina girl who would tiptoe up the stairs to his room a couple of nights a week, and have excruciatingly loud sex with him.

But when you’re 20, toxic dynamics like this seem perfectly natural. I was still young enough to think it inconceivable that the person I liked could like me back, or that someone liking me could warrant anything other than disgust. I submitted my final essay and boarded the plane to Hawaii that night. I was so relieved to be getting out, to be going anywhere else, it didn’t even strike me to wonder about the trivial practicalities of my holiday. I took some Valium and knocked myself out during the safety briefing. But things took a downward turn almost as soon as I arrived.

In the drowsy post-flight delirium, I realised I actually know where in Honolulu I was getting off the bus. When the confused bus driver did drop me off near some hostels, I foolishly left my wallet on-board. Honestly, I wasn’t even remotely phased. This is how beautifully, tragically naïve I was. I thought all I had to do was go seduce a hostel worker, and they’d hook something up for me using bank transfer, an IOU, and it’d be totally chill. Except I started noticing that all the local hostels were weirdly booked out for the exact week of my stay. The only options were expensive hotel rooms at high-end resorts.

The staff at the third hostel I walked to kindly informed me that every bed on the island was occupied for the Pipe Masters Grand Final Surfing Competition; the week-long tournament where surfing fans, from across the world, flood into this one specific Hawaiian island every year. They simply couldn’t believe I hadn’t heard about it. They kept rephrasing the names of the title as though maybe I had just understood it differently. Like, “The Master Pipe. With the surfing competition. Tournament. Grand Final!”

The Valium was starting to wear off. I had approximately 60 US dollars in my pocket after exchanging my Australian cash, no internet connection, nowhere to sleep, and no one to touch base with. Naturally, my initial reflex was to go to a café with Wi-Fi and log onto Grindr.

When I was first coming out – an ordeal that saw me fumbling on various letters of the LGBT acronym for years – I had this idea every time I met another queer person that we this transcendental connection, that we were allies through thick or thin. I’d be so excited and intimidated. Were they having more sex than me? Should we be having sex? Do they want to talk about being gay and share their entire life story? Turns out people didn’t always want to do all that, and I was genuinely surprised by the lack of help offered on Grindr.

As the café’s closing time drew near, my messages became increasingly desperate. Like, “Please, Random Stranger, can I sleep at your house tonight?” And people just started blocking me left, right and centre. I was starting to feel like charity workers trying to get credit card info from strangers on Swanston Street. So, the café closes at sunset and my Wi-Fi connection drops out, and I’m like, “Fuck.” A random couple takes some pity on me and hands me the rest of their medical-grade joint, which obviously didn’t help with the anxiety. There I am on a beach with a suitcase, stoned and alone, as it starts to rain. Turns out wet sand is no easier to wheel a suitcase across.

I felt like an eliminated contestant on Survivor, except there were no cameras and no one seemed to care. And all the drama was happening inside my head. Where was Julia Roberts when I needed her?

At no point in this process did I ever stop to consider calling my parents to ask them for help. In my ethnic-ass family, they would find the whole story utterly hilarious, and I’d never live any of it down. Humiliation hurt more than the discomfort of a rough night… or three. Better to just find a quiet, dryish patch of sand, roll out my sleeping bag, try to enjoy the idyllic tropical conditions, and get some shut-eye.

At some point in the dead of night, I open my eyes to a bearded older man in a tattered flannel shirt, shaking me awake. He’s muttering under his breath and he reeks of alcohol. I’m terrified, of course. I barely have any money to offer him, and no one in the world has any idea where I am. Hell, I don’t even know where I am.

He motions to the bottom portion of my sleeping bag, using the flame from an electric lighter. Crawling over me is a pair of 10-inch-long centipedes, thick-bodied and dark gold in colour. He brushes them off with a twig and tells me to follow him. He explains that I can’t keep sleeping on the beach. As we near his encampment, further inland behind a wall of trees and some dingey public bathrooms, he shows me the line of salt that repels the poisonous nocturnal bugs the island is famous for, including giant centipedes, millipedes, spiders, and scorpions, which, of course, I would’ve learnt all about if I had researched the island of Oahu at all.

There are a few others still awake when I arrive, but mostly the mounds of bodies are motionless.

Over the next couple of days, I enter this bizarre relationship with Tony and his crew of homeless friends. Looking back, I’m still surprised at how unquestioned I was, and how easily they welcomed me into their flow; their daily rituals of reading Bible passages and science fiction texts aloud, with no mention of the irony…

… dumpster diving behind restaurants and supermarkets, and going out swimming in the late afternoon; disrupting the tropical paradise vision of tourist Hawaii. Most of them are US veterans of various wars, some are drug users and/or mentally unwell, some are queer, some have families, some don’t.

Tony and I would wait at the bus stop, sometimes for hours, until a friendly bus driver stopped for us and let us board for free. I remember him breaking down in tears at a public library one afternoon after I showed him Khalil Gibran’s The Prophet, staring at clothes spinning in washing machines at laundromats, jumping over the back fences of holiday homes to use their trampolines.

I’d be lying if I said I didn’t find it confronting that he’d fought as a soldier in Afghanistan, likely murdering countless civilians that looked just like me, that could’ve been me in a slightly different world, that he would never be persecuted for his war crimes, or ever properly understand the extent of the damage he’d been complicit in causing.

When I asked him about it, he told me America’s abandonment of him and his post-traumatic stress disorder after returning from the war was its own form of retribution. Sympathy isn’t exactly the word I would use, but somehow the grudge softened. He’d turned to drinking, which turned to drugs, which turned to some combination of bipolar and schizophrenia after coming back from his final deployment in Afghanistan. There were no mental health services for him, and his family in Ohio gave up on him decades ago.

On one of the last days there, a bunch of us from the camp caught the bus to the North Shore of the island to watch the final round of the surfing competition. It was so surreal being among thousands of people from across the world, people of all ages, genders, races, and there I am with my homeless old, white, male, war veteran friends. I recognise beach bro white dudes from Grindr.

Maybe they didn’t recognise me. Maybe they did and ignored me anyway. Everyone crammed onto the same stretch of beach, all of us digging our ass into picturesque sands, watching tiny, dark figures in the distance carving smooth lines in colossal waves… for some reason.

I lost contact with Tony and the other guys once I left the island, and I have since learned that I don’t really have a lot in common with most gay people, and that’s okay. I still wonder if we should be having sex, though.

You don’t need much to be happy, just some friends, some books, some kindness, and some salt.