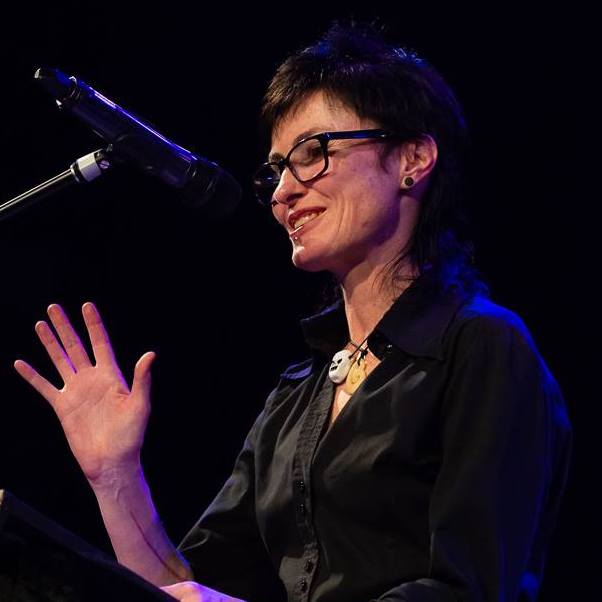 Hi. I’m Maeve Marsden and welcome to Queerstories – the podcast for the LGBTQI+ storytelling night I host and programme. Queerstories events happen regularly in Sydney, Brisbane, and Melbourne, and I’m also now hosting them in regional towns. If you enjoy these stories, please rate, review and subscribe to the podcast, and consider buying a copy of the Queerstories book: A collection of 26 of the stories edited by me and published by Hachette. I’m really proud of this collection and I hope you enjoy it too.

Fiona McGregor is a Sydney novelist, essayist, art critic, and performance artist. She has published five books including Strange Museums, a travel memoir of a performance art tour through Poland. Her latest novel Indelible Ink won Age Book of the Year. She writes for publications such as The Monthly, Audrey, Journal, and The Saturday Paper, and since the ‘90s, Fiona has been active in Sydney’s queer alternative culture, currently co-producing dance party UNDEAD, the annual fundraiser for Unharm, a grassroots organisation campaigning for drug law reform. She performed this story at Queerstories Chosen Family Christmas in Sydney in December 2018.

I grew up on Sydney Harbour in a house of ten people. I was the youngest of eight in an Orthodox Catholic family. By that, I mean that we went to mass every Sunday and every feast day, each with our own missal. If you swore at the dinner table, i.e., said, “God!” you were sent out of the room. Christmas was preceded by four weeks of advent readings, but compared to Easter, it was a total bludge because Easter was Stations of the Cross.

So, despite, or maybe because of, our idyllic environment, our parents were frugal. They had grown up during the Depression and World War Two, so no sweets, chips or soft drink unless it was someone’s birthday. Cold showers and swimming training for the boys several mornings a week.

Dad would hover outside the bathroom and knock on the door if he thought your bath was too long. No television during the week, and if Dad was around on the weekends, no Countdown. Lucky he was a workaholic.

My mother also began full-time work when I was three, so I did get to sneak in enough afternoon TV to keep up with my peers’ cultural references to Bewitched and Batman. But the buck stopped there. And because there were so many of us, there were enough birthdays for the luxury of chocolate biscuits a few times a year to pass my lips. But, I was agog when I went to friends’ houses with their white bread, Fanta, comics, and television; total debauchery in my eyes.

I’ve got about 45 first cousins on my mother’s side, I never remember how many. She was a Kelly from Adelaide, and every second year or so, we drove across the Hay Plain for Christmas with the Kelly clan, which was probably, I don’t know, 60 people, or 100. Anyway, eight kids couldn’t possibly have fitted into that old Valiant station wagon. I’m sure my older siblings were put on the train.

I do remember though that I was always in the boot, as the youngest, which is probably why I’ve become a backdoor woman.

And I do have fond memories of those Christmases in Adelaide, even of the time I nearly concussed myself diving into my cousins’ swimming pool, but told nobody because I was too embarrassed, and went through Christmas with a big egg lump.

Uncle Denis smoked a pipe, and for a while, we – or probably just me – thought he was God. Uncle Bob from New Mexico ate jalapeño chillis out of a jar like they were lollies. Granny had a hearing aid that whistled non-stop, and even though she was too deaf to have a conversation with and smelt funny, she exuded an aura of such warmth and serenity that I loved being around her.

But, back in Sydney on the bushy foreshore, the problem with Christmas Day was what to do all those kids before Mass because, of course, we weren’t allowed our presents til after mass, and we were awake at the crack of dawn. So my father invented a swimming race called the Christmas Handicap.

The Christmas Handicap would go on the fridge after we’d gone to bed on Christmas Eve. Dad was an austere man, but surprisingly he was a witty man as well, and surprisingly gifted at drawing, so the map had quirky illustrations of crabs, and fish, and other things on it. This map of the beach that he would draw, with different points marked, showed where each child would begin and we each had a different race according to our ability. For instance, let’s imagine 1969. Fiona, dog-paddle ten metres. Alex the eldest, ten star jumps, run twenty metres, then a lap of backstroke, and it was a 50-metre harbour pool.

There were prizes such as a tin of pineapple juice.

And if there were Jelly Babies – and for some reason at this beach there often were – the winner could also get pelted with them. There was a Cup, one of those old pewter beer mug type things.

Peter, who was a state swimmer briefly and won too often, got pelted with jellyfish one year. There was a cup too, one of those old pewter beer mug type things, and the winners had their names carved in it.

The Christmas Handicap became known in the neighbourhood, and anyone up early enough would come down and watch or help umpire. In those days, swimming pools were practically non-existent on the harbour, and people who lived there were into the natural environment and they swam frequently.

This beach, for literally the past century, has been a favourite picnic spot for people from all over Sydney. In that tiny secluded little place, protected and privileged as we were, we saw the city’s changing demographics: Greek, Italian, Vietnamese, Middle Eastern, Islander, so on Christmas morning, it was pretty busy. People would be setting up their picnics and wouldn’t notice us trickling out of the bush, one-by-one, going to our allotted starting points.

Dick Taylor, walking to the end of the jetty, whistle in hand, waiting for us to find our starting points, then raising his arm and screaming, “On your marks!” The ensuing flurry of activity stunned the picnickers. Australia, mate.

Most of us moved out of home young because living with ten people under strict conditions is pretty hard yakka, and in those days it was easier to rent cheaply in the inner city. But, the tradition was sealed, and we were still expected to be home on Christmas morning to do the Christmas Handicap.

There followed many years of truancy, hungover swims, as well as guest appearances by louche and bohemian friends attracted by what they thought was a bit of fun and a slap-up meal by the harbour – because my mother was a fantastic cook and hostess – only to find themselves crushed by the rigour of a serious sporting event.

Yeah, it was fun and it was funny, and I could milk this for laughs, but actually there is something really perverse about getting your kids to compete like that, and turning it into a tradition. And as perverted as I have become – no doubt due to this warped Catholic childhood – this isn’t really the sort of perversion that I’m fond of.

And as funny as many of my memories are, there are as many, maybe more, that are merciless in their pain. It was a fractious household. The shadow of Catholicism was ubiquitous. Do I need to say the words “patriarchy, hierarchy” to set the mood? The bullying was constant, and from one brother continued into adulthood.

When I turned queer in my early twenties, there ensued many years of alienation. Homophobia was not explicit in my family – my father died when I was quite young – but implicit from many was that anxious sort of silence that kids itself it’s “just worried about you,” or that defends itself against you, just for being yourself.

The Christmas Handicap petered out in my father’s final years and was pretty much over by the time he died in 1992. My mother moved to this side of the Harbour. Six of my siblings had children of their own and they didn’t torture them on Christmas morning… and none of us go to Mass.

But, one year, my third brother decided to reinstate the Christmas Handicap at Redleaf Pool. I think it was around the year 2000 when Sydney had the Olympics. I do remember that at the time performance-enhancing body-length swimwear and performance-enhancing drugs dominated international sport.

I was deeply involved in the underground queer scene, creating performances and events, and partying, and taking drugs. I thought reinstating this race was a stupid idea and I resented the early rise, but attendance was pretty much mandatory.

So, with my girlfriend, I made a body-length swimsuit and emblazoned the words “Drug Cheat” on the back.

We dragged ourselves down we went to Redleaf Pool, and I won the race.

I’d only won it about twice. Once was when I was dog-paddling, and the second time was when I was a teenager. Anyway, my brother was furious. And I might have fulfilled the logo that I emblazoned on the back of my costume; I’m not sure, it’s all a bit of a blur. Thank you.