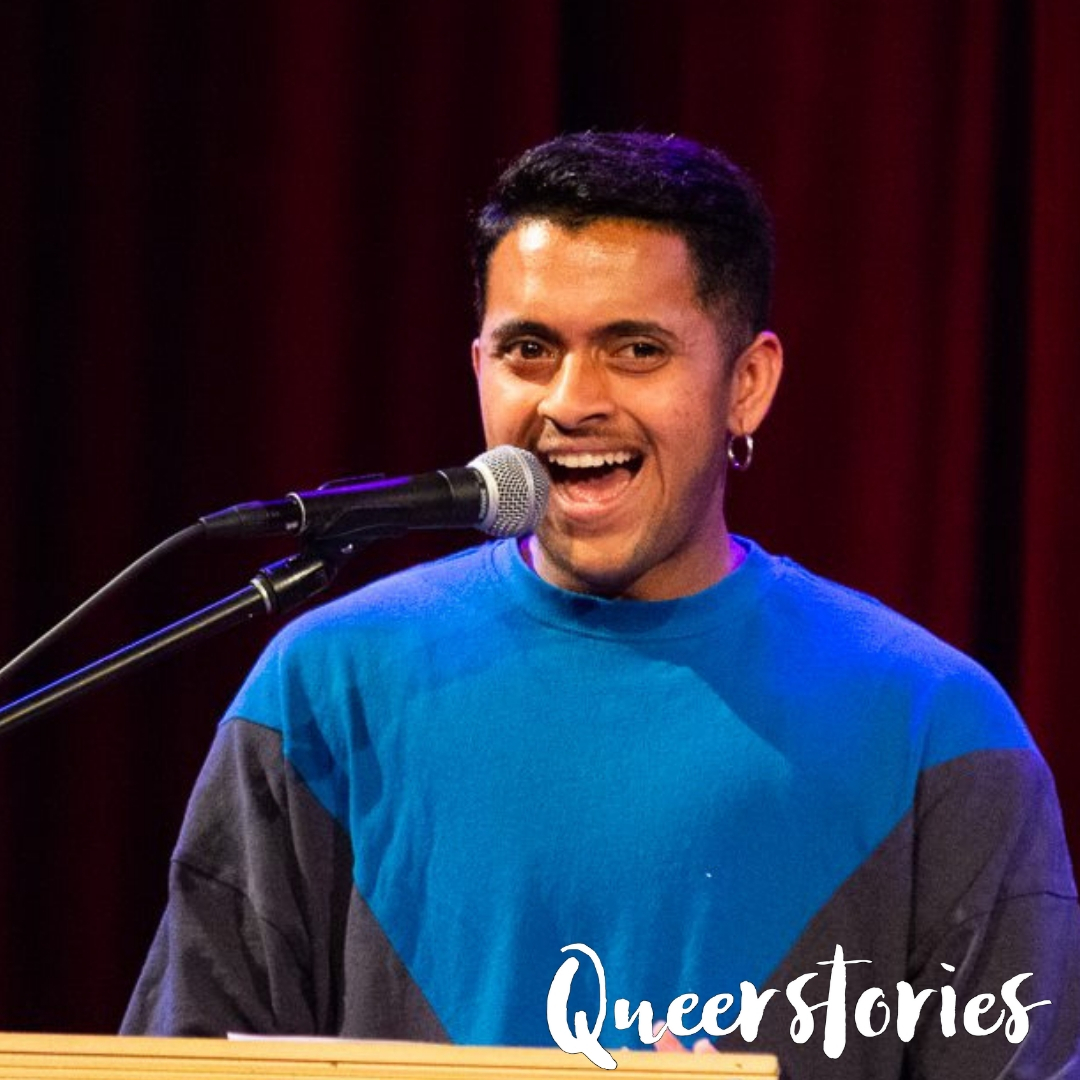 Krishna Istha is a performer, live artist, and theatre-maker. They have performed across the UK, Australia, the USA and Germany. And they recently debuted their new show, Beast, an Arts House Melbourne Commission, supported by public funding from Arts Council England, for Midsumma Festival 2019. Krishna performed this piece, which is an excerpt from Beast, in both Sydney and Melbourne.

I’ve been trying my hand at stand-up comedy and I’m in the process of making this new comedy show. I used to think comedy wasn’t for me, which I think is something many queer and trans people, indigenous and/or people of colour, disabled people and other marginalised folx feel because we are often the butt of the joke, not the people making the jokes.

Comedy has traditionally been a space dominated by white men but I have started to believe that marginalised people should have a place in it. They say laughter is the best medicine and to be honest, in this current political climate, we are the ones who really need it.

Someone once told me, when I first started stand-up, that it was important to define myself really clearly straight away, so the audience was open to listening to me. Apparently, all this can distract from the comedy.

But defining yourself is pretty hard when you’re an Indian American kinda British person in Australia, who is a trans-masculine non-binary bisexual polyamorous dyslexic performance artist.

And there’s nothing more confusing than performance art.

And because I’m a performance artist, I came at stand up from a very theoretical place. I did a lot of research. I tour a lot in life, shuttling around from one place to another. You could say I’m trans-atlantic. Which is just my not so subtle way of pushing the fact that I’m trans.

I’ve seen comedians do their thing in New York, Australia, and the UK and I noticed – apart from the fact that most comedians are cis white men making jokes about their dicks – that stand up is really paired back, and is often just a person with a mic, while performance art can be anything at all. The intention with comedy is for the audience to laugh, and the intention with performance art is for the audience to never laugh ever again.

Stand-up is a bit like polyamory: There are rules, everyone knows what’s going on, and performance art is like monogamy: It’s well respected, it can be satisfying, but you spend the whole time thinking, “When is this going to end?!”

So why is this performance artist doing stand up comedy? Being trans, I take testosterone or T – or T shots – and some of the side effects of it include rapid hair growth, looking 15 forever, and the sudden urge to try stand-up comedy.

Did you know, the confidence you get when you walk through the world as a man is directly proportionate to the confidence you need to try stand-up comedy? Which is probably why so many mediocre white dudes think they can do it.  It’s not their fault. It’s just science.

Like I said, I travel often and when you’re on tour you’ve got no access to your medical needs because trans people are overlooked pretty much everywhere in the world, and the most logical solution is to crowdsource your hormones via Instagram.

While straight people are like, “Where’s the good coffee shops in Brooklyn?” Or “Does anyone know where I can get smashed avocado in Birmingham?” I’ve got to be like, “ Where’s the T? And who can shoot me up in a public toilet?”

I mean, I also want to know where the good coffee shops are because I like my coffee like I like my T. I’m not myself ‘til I’ve had my coffee. I also like drinking tea. Who doesn’t? Last year I was at a stand-up comedy gig in New York in a coffee shop, and I had the sudden realisation it was going to be an impossible task to find good cups of tea in America. As a trans person, I found it easier to find my T shots than I did finding a good cup of tea. In a country where Donald Trump is the leader, it’s outrageous that trans health care is marginally better than acquiring a satisfying hot beverage.

But we all know it’s not that hard to make tea: Just boil the frickin’ water and put the teabag in. It’s like they forget to put the tea bag in every single time. I don’t know if it’s a patriotic thing, but they make their tea more white than white people. It’s so white it’s like Caitlyn Jenner eating a wonder white sandwich in a snowstorm at the farmer’s markets.

As if your president and Fox News weren’t enough, you’ve got to white-wash my beverages too? And of course Donald Trump is more of a pumpkin spice latte; another disgusting thing about America.

When I was in London, I was complaining about the tea in New York, and the Brits were like, “Oh yes. There’s no place like England for good tea. We’ve got the best tea in the world.” Nah, mate. You’ve just got all the stolen tea in the world. And we all know free shit tastes better.

And you’re not exempted. Being white and Australian doesn’t pardon you from the history of British Colonialism.

I’m also doing comedy because I want to cheer up. My people don’t really have a reputation for being a barrel of laughs. We’re known to be quite earnest, which actually I have a bit of a problem with because it’s quite a gendered name. You see the problem? I want to laugh too but it’s often ruined by something called being woke.

It’s a skill to not only ruin your own day but also someone else’s just from a single comment. Take, for example, my six-year-old nephew who lives in the Blue Mountains. Just imagine a smaller version of me: Bigger eyes, an Australian accent and a bit of a lisp. He’ll be like, “Hey, Krishna! Wanna go to the park?” And my immediate response will be,  “Uh, no, child. I’m not letting you run around free in a park on stolen land. Did you know the British came here and killed all the black and brown people and literally stole their land from them, and that’s why Australia is called stolen land? And you are technically an uninvited guest only allowed in due to your proximity to whiteness, and you being on this land further dispossesses and marginalises the indigenous people of this land.”

Cut to him wildly crying cause all he wanted to do was go to the fucking park. But also, I say teach them young.

But seriously speaking, being woke is exhausting. Sometimes I wish I could just take a nap.  It’s hard carrying the expectations of a community on your shoulders. Like I’m trying to do this stand-up comedy thing – it’s a heavy weight to carry.  I mean, I know trans guys and trans-masculine people have a reputation for being obsessed with weightlifting but do I have to deadlift the entire trans experience every time I step onstage?

I’m sick of having to explain things to people all the time like the difference between gender and sex, and how trans people are people, and how we deserve rights or some boring shit about how I was born this way, or “Look how normal we are.” Because I’m not, lolz.

Other things I don’t want to explain include what my sexuality is and what being queer really means. Let’s be honest, everyone is a bit bi these days. Even harry styles came out as bisexual. Turns out, even he couldn’t stick to one direction!

Other trans things I don’t wanna explain is how trans people can have babies, and how we’re also smart, or clever, or creative, or how we use the toilet. Oh, flipping God, I don’t wanna have to talk about yet another gender-neutral toilet. Like, what is it with every person I know asking me for free advice to help them make their toilet sight? It’s not that hard. Just put a gender-neutral sign on the door and people will know it’s gender-neutral. Calm down, babes.

“So… you two married, now that you’ve had the plebiscite and all?” Let’s not forget you threw trans people under the bus when you got gay marriage.

I’ve done it again! I think trans people just can’t be comedians, but I guess I’ll just keep trying. Thanks.