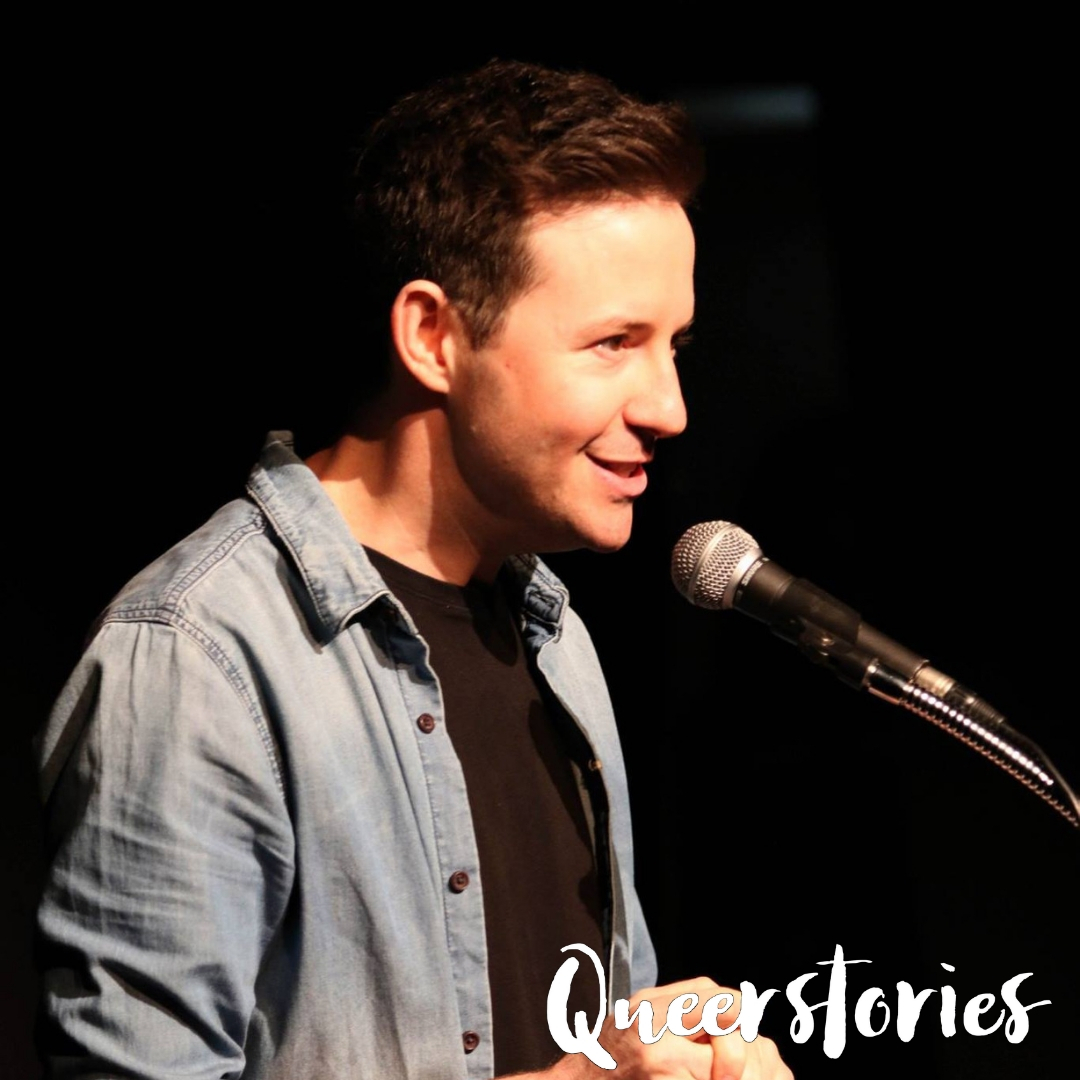 Nath Valvo tours Australia and the world as a comedian, and has an impressive list of TV appearances under his belt, having hosted ABC’s Comedy Up Late, recorded an hour-long stand up special as part of ABC’s Comedy Next Gen, and has been a guest on The Project, Dirty Laundry Live and Just For Laughs Sydney. Nath was nominated for Best Newcomer at the world’s biggest arts festival, the Edinburgh Fringe, and had a hit season at the Soho Theatre in London. He was also selected for the Melbourne Comedy Festival Asia Roadshow, and he’s currently touring Australia with his stand-up show, Show Pony. Make sure you check it out.

Our love affair began in the year 1994. There’s little Nath, 11 years old. Look at me! I had a new pair of Reebok pumps, a sick pair of happy pants, and my brothers hand me down hyper colour t-shirt. I was hot shit, folks. But, on the inside. A swirling, bubbling mix of confusion and fear. It’s hard to describe what it feels like to be different. At 11 years old, I didn’t know much. What I did know was that I wasn’t like my brother, and I wasn’t like the boys in my class or the boys in my street. I hated video games, sport, movies, school, my family, and sunshine.

I hated everything, until one Saturday morning. My brother, two sisters and I were sprawled out across the couch watching Video Hits. My sisters eagerly awaiting the film clip from East 17, my oily angry brother popping pimples, waiting for a Silverchair song. And then, the opening strings of a song called Confide In Me began.

And then, I saw her. A petite goddess dressed in a canary yellow jacket appeared – that’s for the gays, that reference. Her name was Kylie. The words – if you know the film clip – “Lonely.” “Call now,” and, “1800 CONFIDE” flashed across the screen. The first words she ever spoke to me were, “I can keep a secret and throw away the key, but sometimes to release it is to set our children free.”

The spell was cast. The next few years is a montage of secret tape recordings of Kylie songs from the radio, secret copies of magazines with interviews, watching Hey Hey Its Saturday with the family, hiding my excitement that Kylie is a guest judge Red Faces, secret trips to Brashs at Greensborough plaza to purchase her album, Impossible Princess. Kylie went indie. Yes.

Eleven Kylie fans in tonight. Cool. Wrong crowd. Why a secret you ask? Well, it was simple. As my older brother eloquently put it, “Only fags like Kylie,” so the rules were set. If you love Kylie, you loved dick.

And at the time, dick was a bad thing to like if you were a boy. Turns out he was right.

The next few years, the two main loves of my life were nude men and Kylie, both, especially the first one, but also keep my Kylie obsession a secret, so days on end in my bedroom, listening to Kylie on my walkman, nice and safe. My mum would often ask, “What have you been doing in there all day, Nathan?”Obviously, mum thought I was wanking – an assumption I was far more comfortable with than the actual truth.

Now, today as a 35-year-old gay man, I don’t have money for a house deposit. Could it be too much avocado on toast? I don’t know. Could it be the 33, soon to be 34, Kylie concerts I have attended in my life? – Keep your judgement to yourself – including two trips to the UK to see her?

I have no Super, but I do have every Kylie CD, DVD, calendar, coffee table, and limited edition Kylie doll you can find.

AUDIENCE MEMBER: Good on you!

But let’s fast forward to the big moment. The year was 2010. I was volunteering and hosting the breakfast show on Melbournes gay station, JOY FM. Kylie released her tenth studio album, and I wanted to interview her on the phone. Everyone laughed. Kylie has bigger big fish to fry than community radio in Melbourne, everybody said. So I made a promise on air to our 36 listeners…

… if Kylie called our show, I would get a tattoo to mark the occasion.

I was not a religious person until this moment because somehow, someway in this crazy world, Kylie caught wind of my promise. One Thursday afternoon, I received a phone call from the boss informing me that Kylie was not going to call my show. In fact, we had now been invited to meet her and interview her in person. One week later, we were there. Myself and my co-host, Andy, sitting in a hotel room in the Park Hyatt, impatiently waiting for our scheduled 12-minute chat with the creator of the known universe.

Finally, she arrived. Kylie walked into the room. I went to stand up to greet her but forgot how to walk. Every part of my body felt heavy. Kylie’s first image of me is the world’s gayest zombie, shuffling over to her to greet.

She hugged and kissed me on both cheeks, saying hello. I broke out into a sweat. I remember feeling my face burning red. My hands trembled. I did my best not fall on my knees and kiss her feet.

“Hello, Kylie. Nice to meet you. I’m Nathan.” “Ethan, is it?” “No, my name’s Nathan, but you can call me whatever you want,” was the first two sentences I said to my God.

What followed was a true out of body experience. I know I was talking and things were moving, but I was floating high above the ceiling as 27-year-old me looked down at 14-year-old me, talking to Kylie – that Kylie – from that Confide In Me film clip.

I slowly descended back into my body, and then something clicked. Of course, the crazy fan kicked in, so I dived straight into my psycho questions. We chatted about her concerts, her tour designer, her album process, choosing producers, film clips, lyrics, single choices, B-sides. Kylie quickly realized this wasn’t a normal interview. She was, in fact, face-to-face with a raging homosexual superfan, who at any moment could try and cut off a piece of her hair.

She touched my knee three times. Three. I’ll never forget. She winked, she relaxed. She was witty, she was quick, warm, and very funny. Our designated 12 minutes flew by. Her minders started to give her the wrap-up. Kylie jumped in and gave them all clear to let this freak continue his interview.

OMG, guys. Kylie liked me. Anyway, then, the promise. As Kylie had come through on her side of the bargain, it was now my turn.

NATH: You are… With this pen, you are to write a very pretty and amazing “K” here for me, and it will be tattooed over at 5 PM today, as part of you getting our message and calling JOY. No pressure, Kylie.

KYLIE: I am feeling… I am under immense pressure right now.

NATH: This better be the goddamn K you have ever written.

KYLIE: I need to practice! Here, hold the microphone.

KYLIE: Tell me what you want. You want it like that?

KYLIE: But I don’t normally do a K.

NATH: Just don’t make it too big because I’m scared of pain.

NATH: That is absolutely awesome!

KYLIE: That’s a good one!

NATH: Look at that.

I then went straight to a tattoo parlour in Fitzroy and got that tattooed over. The guy that tattooed it, his name was Tiny and he had a mullet. He wasn’t impressed with my story, but anyway. It’s like, “It’s Kylie, man.”

To wrap it up, to the people that say Kylie isn’t the best singer or the best actress, I say, shut your mouth, homophobe!

The question is often asked, “What is it with the gays and Kylie?” Well. I can only speak for myself –  Kylie is so much more than a pop star, she’s my escape. She is the human manifestation of glitter. Okay?

To some people, this tattoo is just a scribble of a star. To me, this tattoo is a big fuck you to the little part of me I was ashamed about for so many years. It’s a fuck you to that little voice inside me that says, “Don’t like boys, hide your gayness. Don’t be camp, fit in, be normal. Stop being cliche. Stop being femme. Go back to hating everything.” And on the plus side, whenever anyone asks what this tattoo is, it’s always a really fun story to tell. Thank you very much, ladies and gentlemen.