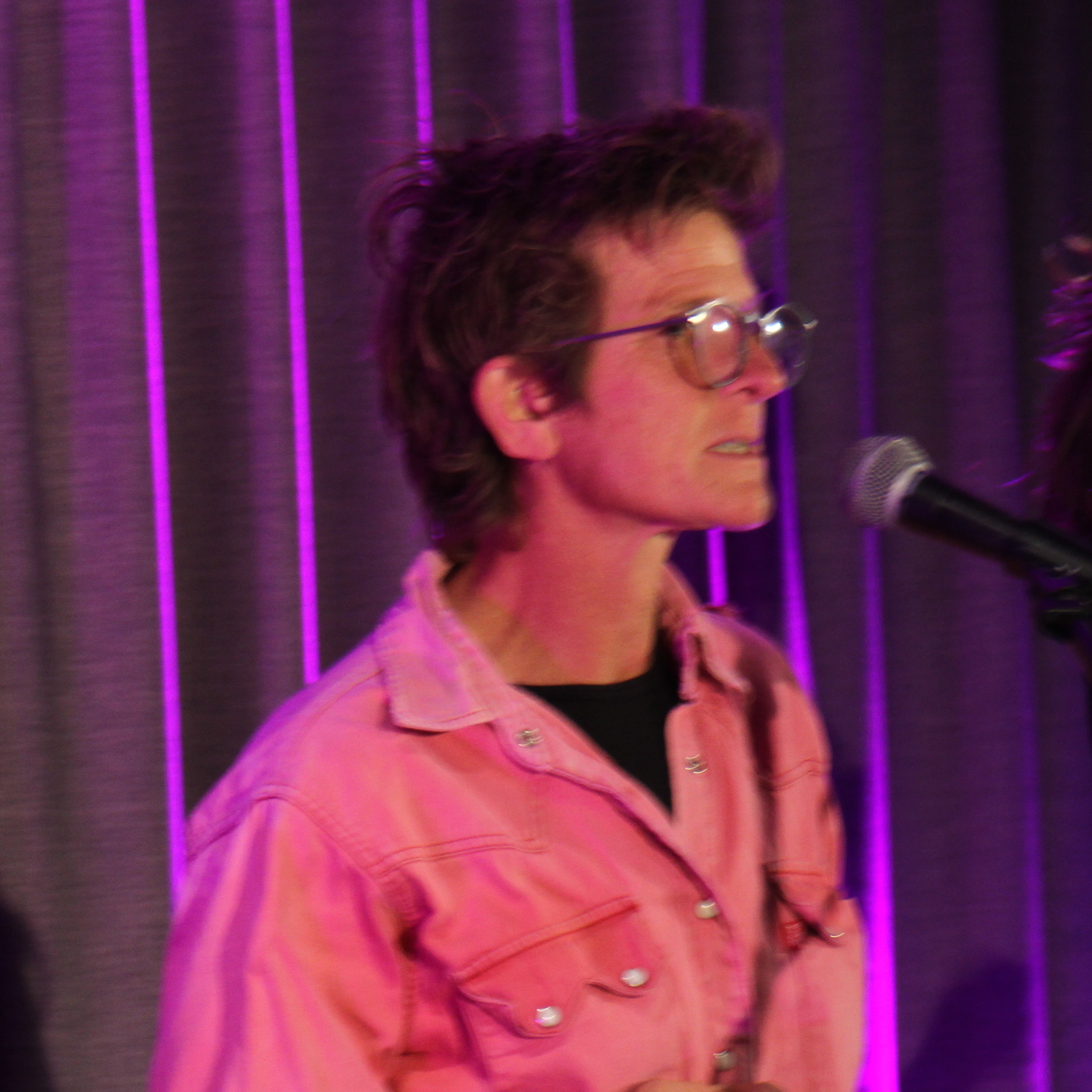 Hi. I’m Maeve Marsden and welcome to Queerstories – the podcast for the LGBTQI+ storytelling night I host and programme. Queerstories events happen regularly in Sydney, Brisbane and Melbourne, and I’m also now hosting them in regional towns. If you enjoy these stories, please rate, review and subscribe to the podcast, and consider buying a copy of the Queerstories book: A collection of 26 of the stories edited by me and published by Hachette. I’m really proud of this collection and I hope you enjoy it too.

Virginia Seymour is an ecologist and is a well-known legend in the local area around Lismore where she performed this story. She is known for her environmental advocacy and restoration efforts. An ex-chef, gender non-conformist, recovered alcoholic and all-round handy hero, Virginia is lovingly referred to as McGyver or McGayver. Please enjoy.

My name is Virginia, Ginia, Gin, Virg, Virgil, Fur Mir, MacGayver and I’m an alcoholic. I am of mostly of Irish, Scottish, British, coal mining, gold-digging descendants with a predisposition to alcoholism and gayness.

And that explains and supports a lot of things. I grew up on Awabakal country, a place I knew then as the coal mining, wine-growing epicentre of the Hunter Valley in New South Wales.

I remember as a young child how I felt relief when mum drove through the bottle’o at the end of the day because it meant our folk would be happy for a time. With their self-medicated needs met, the focus would be off the kids and onto frivolity and disassociation.

Usually, it took ‘til after dinner, but words would slur, and wires would cross, and boundaries would be smashed, and before you knew it, Mum and Dad would be Kung Fu fighting down the hallway. And before you jump to conclusions, Mum was the heavyweight of our parentship.

However bad this all sounds, the family home was not completely devoid of structure, stability and ritual. There was a schedule of sorts, and I was the hero child; the one who prepared the school lunches, cooked dinners, cleaned house, ironed everything except the socks. I chopped wood, lit fires, and whilst babysitting the younger siblings – all squabbling as it may be perceived – and all before Mum came home or else. Sadly, my reliable quick-fire start technique, using the fence palings for kindling, was, uh… exposed.

Like many children of alcoholics, I was afforded a niche set of survival skills, also known as superpowers. These included – and not limited to – hyper-vigilance, people-pleasing, problem-solving, and self-reliance. Early evidence of my niche dysfunctional superpowers were when I drop-rolled mum to put her out when she caught fire in front to the open fireplace, just like we learnt at school.

Or, by pulling my own financial weight while I was in high school through having part-time jobs. I did try taking on a second part-time job at KFC. On my first day, I was issued a brown dress, skin-toned pantyhose – size Tall – and a name badge that said “Melanie”.

All this and the smell of fried chicken was all enough for me to realise the gravity of what I’d done. And this was the cost of self-reliance.

Fast forward many years, and I found myself as an ecologist working out south-western Queensland, conducting koala surveys. Having never been to the region before, I was really taken aback by the big sky for one, and the rich, dry red dirt; dry as my mouth. And, the stark absence of green.

My experience, mostly alone, out West, was rich and spiked with mindblowing and eye-popping experiences. I saw fledgling pelicans learning to fly, shingle backs, frill necks, goannas all basking in the sun. Flocks of bright green budgerigars all roosting for the evening. I saw brolgas dancing in dust storms, and the tragedy of kangaroos all expired by dehydration, like cardboard boxes strewn through abandoned buildings. And the uncapped bores, each pumping 400 litres a minute from the Artesian Basin. The stories from farmers of the gliders and koalas that climbed up the blade of D10 tractors into the cab, as the land was being cleared. The roadkill, the roadkill, and even more roadkill.

Anyway, I went about arranging to meet landholders who would kindly send me in the direction of where there might be koalas on their 10,000-hectare property. I also gleaned hot tips, like, “Avoid the tyre piercing spikes protruding from the soil,” the remains of the clear-felled Mulga, a hard woody acacia. The directions would generally sound something like this:

“Go west along the fence line for about eight Ks. Then you’ll come to a tree. Then turn south until ya come to the ole pig trap. Don’t stop there because it’s dangerous, especially if there’s a live one in it. Keep going until ya come to the ole shearers quarters on ya left, and then ya come into the channel country, proper. That’s were ya usually find ‘em.”

The folk were generally spot-on. I’d arrive stake the place out, and set up camp. The days were spent setting out the plot – I called it lassoing trees – measuring the diameter at breast height of each tree in the plot – I called this hugging trees.

Searching for koala scats – or poo – under each and every one of the trees. Out there I found myself in plenty of situations where I needed to deploy the superpowers. For example, people-pleasing. About once a month, a twenty-something honours student named Grey Nomad – G-mad herein – would come to meet me, and together we’d complete spotlighting surveys, obviously at night in koala habitat and along creek beds. My preference was to conduct these surveys on foot, however, this one night, G-mad was tired and concerned that we may get rained on, and asked that I drive the ute along while they hung out the window with the spotlight. I agreed but was reserved: rain, mulga. I was even a bit scared.

We embarked about 10 P.M., and soon we came to a dip in the landscape where it wasn’t really clear what the terrain was like in front, so I asked G-mad to get out of the ute and check the path. They returned to the ute and reported back, “All clear.” So we proceeded down the short, sudden, steep descent, and… thud. Bogged. All four wheels were up to the axels. There was no traction back and no traction forward. No winch, just regret.

Deploy problem-solving. We dug and we packed, and we dug and we packed, trying to free ourselves for hours. The whole time, G-mad was harping on about when the rain came we’d be washed away. G-mad calculated using backtrack on the GPS that we’d travelled about four Ks from the abandoned homestead where we’d camped earlier.

That fact of distance thwarted any ideas of going back to scavenge for resources to help us out of the bind. At about 3 A.M., G-mad decided it was no use and left alone on foot to get some kip back at the camp. Over-responsibility. With the threat of rain coming and an overworked sense of self-responsibility, I stayed, determined to free the ute from the bog or else.

The sun began to rise at about 4:30 A.M., and in the light, I could see the homestead. It was only about 500 meters away as the crow flies… not the four Ks G-mad said.

Anyway. Resilience and Self Reliance. I ran over to the sheds of the homestead to see what thing I might find to get us out of the slop. My eyes popped with joy. There were two metal ramps. I haul them over. With spots of rain, I hurried across the prickly saltbush, over hill, down dale, back to the bog. It took me about 30 minutes to complete the bridge. I wasn’t entirely happy with it but this was no time for the superpower, Perfection.

G-mad arrived with sleep still in their eyes and we hightail it out of there. No koalas were seen. Anyway, the days grew into summer and eventually became just too hot to continue with this sort of work in the 52-degree heat. Hugging ain three-litre block of ice, I called my boss and made arrangements to finish up.

The journey home was quite surreal after all the excitement and exposure. And on the way home, I came upon this kangaroo. It had been hit. I noticed as I drew closer to it that it was lame but it was still clawing its way off the road. Now, it was off the road. The breath was heaving and pounding, and there was all this bright crimson blood oozing from too many wounds. I had nothing humane to help it along, but who was I to determine the future of this beast anyway? So I looked the kangaroo in the eye, and it was frightened and no doubt in shock. I stayed and I prayed that that animal would have a safe passage to wherever.

I felt more whole, fuller, wilder, and closer to self – not desensitised, just present. Thank you.