Steven Ross: Country Speaks to Us: A Meandering Fishing Yarn 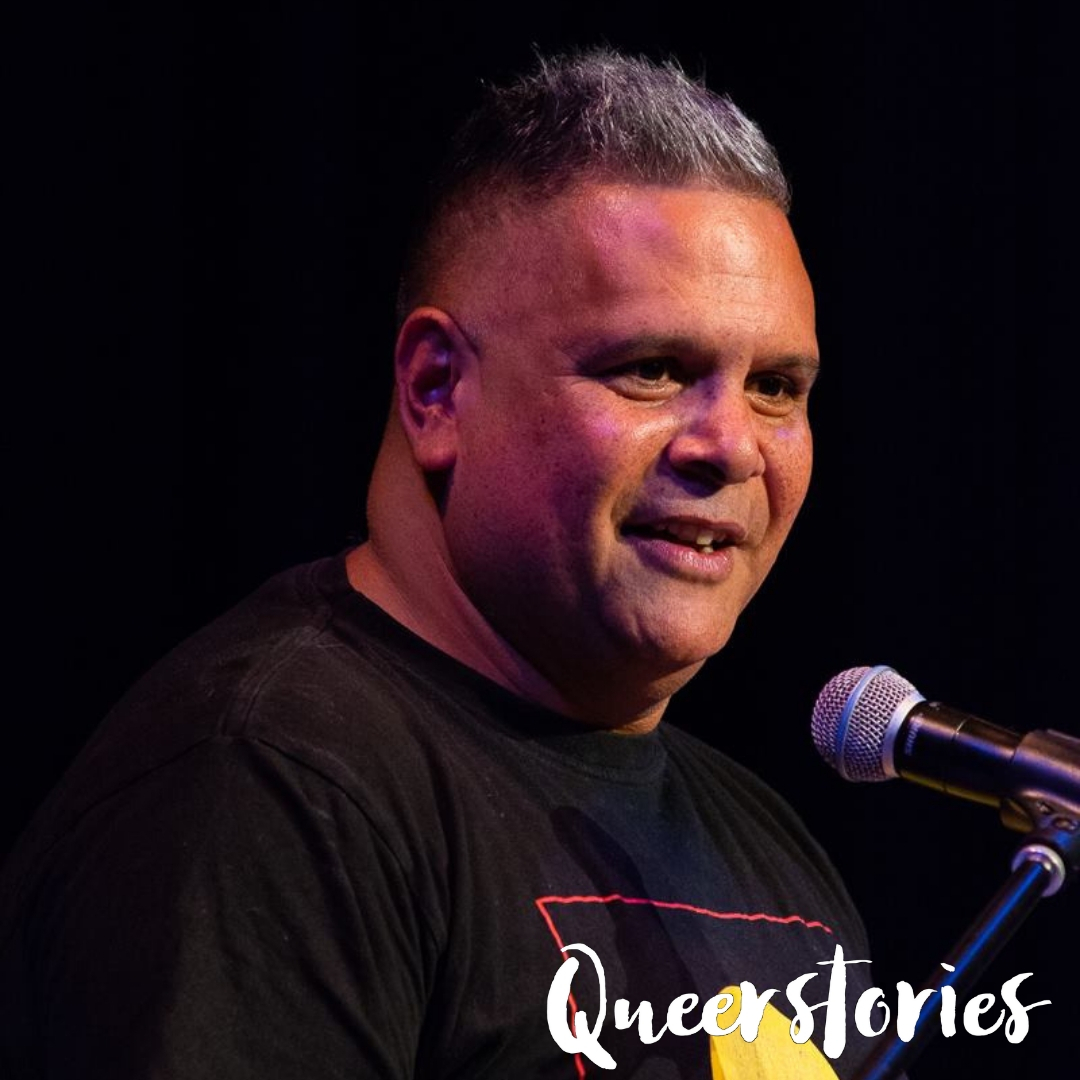 Steven Ross is Wamba Wamba man from Deniliquin in southern NSW and has cultural and familial connections to the Wiradjuri, Mutthi Mutthi and Gunditjmara peoples. Steven has worked in the public service in Indigenous policy, environmental affairs, LGBTQI projects, cultural and arts coordination, and local government. He has sat on the board for Murray Catchment Management Authority, Yarkuwa Indigenous Knowledge Centre and the South-West Regional Arts, Inner City Legal Centre, and the New South Wales State Library.

Steven’s story that he performed at Queerstories Western Sydney in January 2019 also appears in an extended version in the Queerstories book. I know I bang on about the book quite a bit on this podcast, but it’s a beautiful piece of writing, and I hope that if you haven’t bought the book, you will after you listen to Steven perform it.

I have worked out in Parramatta for seven years, and I lived out here because I love this community so much. It is extraordinary. I particularly love working with Darug people, and I honour and acknowledge their elders past and present, and all other Aboriginal brothers and sisters in the room, especially the gay ones.

It’s been an absolute pleasure working and living on Darug Country, especially River Country, Parramatta River. And, for those that don’t know, water for Indigenous people is incredibly significant. Water, we think, has a spirit and a sentience, and its own inherent rights. And, I think if we all looked at water that way, the world wouldn’t be in the mess that it is right now.

Especially where I come from, Wamba Wamba Country. There’s no ‘O’ in there. I don’t know why people keep doing that. I have always settled near rivers, and although the following story is not set on Darug Country or Western Sydney, I wrote it out here, nurtured by this Country, particularly the bit about my grandmother, which I added into this story, which I told before.

From one river Country to another, I give you a meandering river story, meandering fishing yarn.

Country Speaks to us.

I am literally the worst fisherman ever. As a Black man, that is a really hard admission to make. On the other hand, Kuka Laura, my grandmother, was a crack fisherwoman. Actually, in my mind, she was a superhero –  hunting, fishing, animal-skinning, mussel-diving, wild Salvation Army tambourine-swinging, one-eyed Wonder Woman who brought up all of her nine children – a bunch of rogue kids – a few grand-children and a yard full of animals.

Kuka was always supplementing our sugary, flour-coated Western diet with native foods. One day, she’d serve up freshly caught kangaroo or that honorary bush food, rabbit; another she was diving for mussels in the Koletch, or fossicking for mushrooms in a muddy paddock. And, of course, she would take us to her favourite fishing spots, particularly near the bridge that crossed the river near Moonatullah, the former Aboriginal mission about 50 kilometres from Deniliquin.

Koletchla River – White people call “Edward” – meanders out of the Murray River near Mathoura in southern New South Wales, and grinds westerly through Barapa Barapa and Wamba Wamba Country, converging with the Wakool River after being fed by countless creeks, runners, and little watercourses.

Kuka Laura, a Mutthi Mutthi woman, married my Ngupa – or grandfather – Neil, a Wamba Wamba man. He also loved fishing but it was mostly her domain. I remember her taking us to dive for pithen – or mussels – and netting lip-lip-wil – or yabbies – in the shallow sandy parts of Koletch.

We were in awe of this voluminous woman, normally so staid and mostly sedentary, moving through the then clear water with grace and dexterity, gathering up mussels with a swish of her hands, collecting them in the lap of her house dress. We giggled with the wonderment of all kids who see their parents or grandparents do something adults just don’t do. We were thrilled.

Kuka tried to teach me to fish despite my revulsion for impaling worms and ripping open shrimp. In later years, I would try to employ these skills fishing with my sister and her partner at the time – my sister’s a lesbian – but I rarely succeeded.

It would be normal for the two women to be pulling in Murray cod either side of me, and for me to be reeling in twigs, plastic bags, the occasional muddy shoe, and more often than not getting fucking snagged on a submarine tree root. That is my lot in life: To be surrounded by great fishers.

Ironically and cruelly, my totem is the kurng-kurng – or kookaburra – a magnificent kingfisher. And those that know me and know my laugh can definitely tell that I’m a kookaburra.

Kuka used to let me stay up late to watch old movies with her or Wimbledon. I think she knew I was unusually interested in Stefan Edberg’s legs. She taught me to skin and gut kangaroo and rabbits, and I was the only kid that she made do this onerous talks, and I resented it at the time. In hindsight, it was consistent with her desire to never box me in. She made me feel worthy to receive cultural knowledge as one of the tribe, part of an ancient unbroken line of Wamba Wamba people.

Although Kuka Laura was a good, God-fearing Christian… She’d love Jesus Christ Superstar tonight… I don’t think her lessons were intended to prepare me for the impending doom of Judgement Day. It is, however, comforting to know that if the apocalypse comes and you need someone to skin a rabbit, I’m your man.

One hot and dry summer’s day in 2008, I decided to spend time in the bush with my gay cousin George, who, like my Kuka, was a gun fisherman, reeling in everything that had gills and fins.

We drove his jeep deep into Werai Forest – the world’s oldest river red gum forest of some 14,000 hectares, replete with wetlands, creeks and ceremonial sites. Our name for Werai is Pengalite, meaning a gathering of many clever men or witch-doctors. Pengal also means Murray cod.

This is the forest that sheltered the local Wamba Wamba and Barapa Barapa peoples from the onslaught of colonisation. In the early 1840s, some eighty survivors of that violent and jolting process walked out of Pengalite. Every single local traditional owner owes their life to those brave souls and to the forest. There are thousands of us now.

George and I arrived at a spot called the Bunyip Hole, a well-known deadly fishing hole, but that day nothing was biting, nothing was moving or rippling the surface of the slow-moving and rolling brown water – not for me, and not for George.

I suggested we cruise over to another part of the forest near Colligen Creek, a place where the local traditional owners camped and fished for thousands of years. We were joined there by sister’s former lover, Sharnie – she was a very distant cousin, I have to say.

We walked to a serene little spot on the low bank of the creek where a bed of wangel – or cumbungi reeds – and logs apparently created the perfect hiding spot for fish. As I was about to cast in a line, a wind blew up from the south. We turned our eyes skywards, and a dusty ngarak – or whirlwind – rustled and violently tugged at the branches of the trees that looked down at us from the high bank.

We have always deified ngaraks. They are how clevermen travelled across Country. This particular mystical transport danced through several trees and, to our astonishment, twirled down the high bank onto the water, where it skimmed, and shimmied, and skipped across the creek, making it gurgle and splash.

The ngarak then leapt onto our bank and continued its dance deep into the forest, shaking and rustling river red gums in his wake. We were stunned. Sharnie, who had always been superstitious, screams, “Let’s get the fuck out of here.” But I said, “Fuck it, I’m throwing in a line,” and I whirled my shiny sinew with its tasty payload into the spot where the ngarak had pierced the water. It landed with a satisfying plonk.

No more than ten seconds later, just as I settled in for an impending disappointment, I felt a powerful and unfamiliar tug on the line. Aghast, I reeled in a fucking whopper of a Murray cod for the first time in my life.

In that ancient forest of clevermen and witch doctors, I like to think that that ngarak was sent by my Kuka, dancing through the forest to drop off a little gift and to remind me of her omnipotence; of the omnipotence of all my ancestors.

Ecstatic and wanting to bask in my newly found fishing acumen, I quickly drove home to my mother’s farm, which she bought in 2000. It’s about 15 kilometres from the mission where she grew up as a little girl until in 1968 when the entire population was forcibly removed into Deniliquin.

I’ve got to say, the reactions from my proud Mutthi Mutthi mother and my stepfather threw me for a six. When I relayed the story to Mum, she launched into a rather bland scientific explanation of how the whirlwind dropped red dust onto the surface of the water, ionising it, and that the agitation of the creek piqued the attention of the cod.

My White stepfather, on the other hand, said in a hushed tone, “Oh, that’s a sign.”

I know. I wonder if Kerri-Anne Kennerley will ever come to that realisation.

She really should come to Western Sydney. There are 41,000 Aboriginal people out here.

Country speaks to all Aboriginal people, whatever our layers, our spectrum, or identities, whether we are straight, gay, or Muslim, Christian, or parliamentarian, a lawyer, or a buttoned-down public servant like me. That connection to Country is not easily severed – not by invasion, colonisation or attempts at assimilation. That day, and every day, Country speaks to me. It spoke to George and Sharnie, and thousands of other Black gay, lesbian, bisexual, transgender, intersex and queers.

Country, like my magnificent Kuka, informs and drives our lives at a deeply profound level, inextricably and often intangibly, and she may make a kingfisher out of me yet.