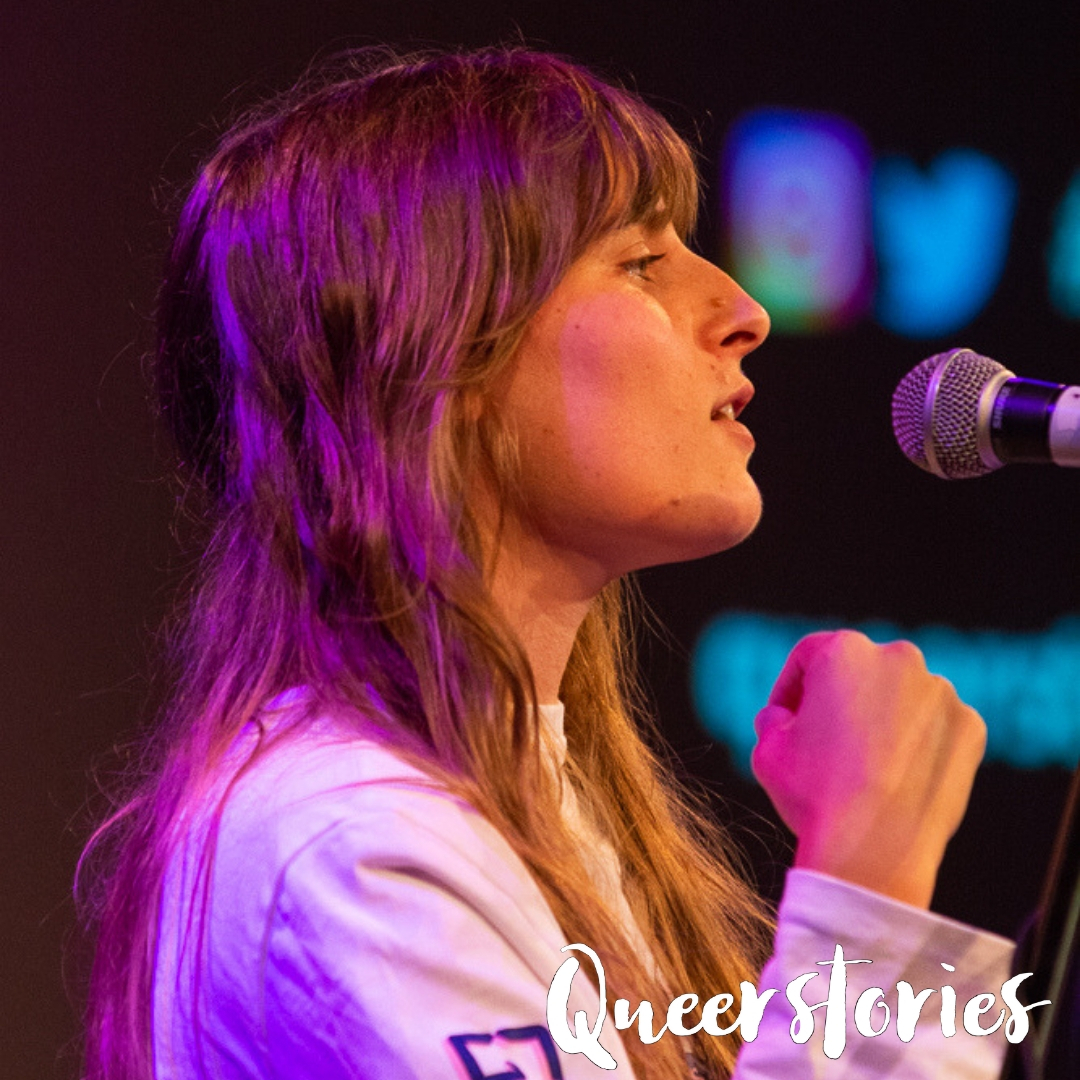 Tilly Lawless is a queer sex worker who uses her Instagram to analyse her relationships, romances, and motivations. Growing up in rural New South Wales, her writing is often a bucolic love letter to the countryside she grew up in, whilst also being an intimate look into her work and emotions. This piece was performed at the Archer magazine launch in Sydney in March 2019.

It was midway through a seven-hour booking that I knew I needed to break up with my girlfriend. She was angry at me about something; what, I knew not. Tied at ankles and feet I wracked my brain whilst the client kneeled between my thighs, easing the neck of a lubed-up champagne bottle inside me. Tears ran down my cheeks that I was unable to wipe away, as she slapped me repeatedly across my chest.

I was mortified, terrified that he would notice that her violence wasn’t just professional play, but intimate aggression that had seeped out of the confines of our relationship, and splattered over the walls for everyone to see, contaminated the workroom, debauched it; but not in the way he was paying for.

Had I said something in the girls’ room that made her feel small? Had I talked too animatedly and laughed too vivaciously? Had I earned more money? I couldn’t be sure in that moment, but what I did know in the brittle, stone-pit of truth within me was that whatever tenderness had been nurtured in the fruit-flesh of the relationship between us was gone. There was nothing but rock-hard left to chip my teeth and heart upon. It had all bled out over months of fighting and straining, and all that was left was the sad pretence at it, a mocking burlesque in the doubles we did together. Paid passion.

I wondered if it had only straggled along, a corpse of what a relationship should be because it had been strung out on the frame of our work sex. We had stopped having sex at home but as both our incomes relied on the doubles we sold together, we played the in-love couple in front of our clients ‘til even we were fooled. It wasn’t till she broke down that fourth wall, shattered the illusion in the presence of the client, that I was able to accept that it had been gone for a long time.

In the way of all relationships that end far past their time, the ones where you know you’ve not only been flogging a dead horse but riding and grooming it too…

I never wanted to see her again in my life once it was over. I had to though. While we were together she had gotten a DUI, and we had brokered a deal with an unethical lawyer-client that he would represent her in return for three hours of our time.

I thought that perhaps one of them would release me from the commitment. He messaged me a week before it though, “Was sad to see you’ve broken up but a deal’s a deal.”

I hoped up to the last moment that she would offer to see him for six hours or three hours and pay him some, for both our sakes and because it was her debt to pay. I know that I wouldn’t want an ex paying off a service for me; I want to owe them nothing. I don’t even want to be friendly to them, let alone grateful.

… but I have seen this well-meaning approach go haywire so many times. We all know exes who are still co-dependent, twining around each other’s legs, and tripping each other up when they try to date someone new, giving a possessive and jealous warning snap. I want my exes gone. I don’t want them haunting a future partner and, in return, I respect their potential relationships enough that I don’t want to be a threatening ghost orbiting too close for comfort.  So, I went to the booking. It was painful. People sometimes ask me I ever feel coerced into sex work, does it ever feel non-consensual? I can safely say that having a three-hour threesome with my ex that I never wanted to see again in my life, for free, was the only time it ever felt that way.

One night, as her moans of sex with a stranger, that had never before rattled me, drifted down the stairs, and I sat in the girls’ room, unbooked and holding in a sob, a girl walked into the parlour.

I have seen many women clients in couples but it is rare for a woman to come alone to an establishment, and this girl was hot. I watched her on the cameras and got nervous to even intro her. Bottle blonde, tight black leather pants and ankle boots, a red sweater, gorgeous face. The other girls all gushed over her. “Why isn’t she on this side of the counter? She would surely milk money from men.”

There was no way she was going to pick me. Sure, I was the only queer girl available but she would definitely pick the Russian brunette with the big lips, or the Venezuluan with the tits and ass. What did I have to offer her? I’m not attractive to women.

When the manager came in to tell me I had got the job, an hour booking, I was so nervous that my hands began to shake getting the tray together. I, who have had thousands of men come across my tits. I, who was sending nudes to strangers online at fourteen. I, who can speak to an audience of hundreds. I, who hadn’t had sex with a girl besides my girlfriend in two years. When I got into the room she was lying naked on her belly and I began to tentatively massage her. “You are like, so hot. What are you doing here?”

“Well, actually, my sugar daddy bought me this as a treat. I’m bisexual and I’ve always wanted to do this, so he was like, “Here you go!” I’m a stripper myself, but I’ve never been on this side of things.”

“Oh, my God. That’s awesome. And so good that he let you just do it and didn’t want to watch.”

I, however, was not super chill. Massaging men is so routine to me that I don’t even think about it. As I got her to turn over on to her back, I stopped, unsure of touching her.

She was as nervous as I was.

We ended up fucking and it was amazing.

Afterwards, we sat on the table together drinking the terrible complimentary champagne, and I told her about my recent break-up, and how she had come in at exactly the right time, and how it felt like the universe was telling me I was going to be all right. You will connect with people again. You will come back into yourself.

Work is best for me when it teaches me something on the clock that I haven’t realised off the clock. When it is a window into others’ lives or a mirror to my own, those three bookings were stepping stones through the grit and gravel of my private life, removed from and yet placed upon the real me and my real life. Overgrown with the moss of time, they will become one in the same; just a part of my history.

A recent booking stands out for me as this also, when a pregnant woman booked me privately. She was seven months along and had never been with a woman before, and her pregnancy hormones made her want to try it. Her husband left the house for the three hours she booked me for, so it could be her own private experience. I had never been up close to a pregnant woman before, and I’d certainly never fucked one. Her breasts were firmer than silicone implants, blue veins showing through the pale. Beforehand, I had been apprehensive  – had quizzed friends with children about what positions are best to have sex whilst heavily pregnant, had confided to my partner my fears about topping her incorrectly, somehow squishing her belly.

“I’m not as fragile as you think,” she said when she saw me hesitating. I held her belly in awe. She was the softest kisser, and inside she felt no different to any other woman I have fucked. I expected it to be different somehow. I had also forgotten, from my teen years of being experimenting girls’ first times – a lesbian springboard if you will – that often when a girl has sex with another girl for the first time, she is most interested in the kissing and the gentle touching, the never-ending slow sex that has no clear beginning or end, unlike heterosexual sex, which often finishes with the man’s finish.

All the sex toys that I had brought, and was terrified of having to use because I am a true pillow princess, scared to top, even for pay, went unnoticed and unwanted. Thank God. Afterwards, I gushed to my partner on the phone about how intimate and transcendental it had been for me, how excited it made me for my own planned pregnancy, how it turned me on so much because I was imagining myself pregnant through my partner’s eyes, thinking of her finding splendour in the same things I did. I fantasised. She creampies my pussy and it drips down into my ass. Tilly Lawless: Sex worker, writer, mother.

Who says thoughts of pregnancy have to be untarnished, somehow chaste even in the midst of a sexual act, thinking only of that greater act; missionary and medical? My thoughts of pregnancy get me on all fours wanting you. Wish you could fill me right up in amongst our rape play and lingerie. When you’re wrist-deep, elbow-soaked, brow sweat upon my loins, my womb aches. What better climate to create in?